You Gotta Make Up Your Mind: Reviews Of Recent Releases By Local Bands, Pt. 130 (Part 1) 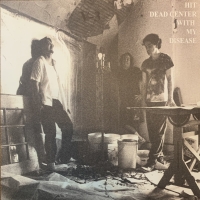 I was originally going to write this as three separate reviews but once I started on that endeavor I realized this way probably made more sense (especially since I think a lot of people are probably going to pick up all three as a unit anyway— and maybe that’s how they’re supposed to be heard, who can say). These three records are made up of recordings made (mostly) from 1986 to 1991 by the Jim Shepard/Nudge Squidfish/Roxanne Newman/Rudy Smith lineup of the group. I guess for context within the overall musical career of Jim Shepard this is a somewhat transitional era between the more experimental early stuff and the less experimental later stuff? I kinda think the experimental element was always present, but this material is a middle ground of sorts.

So what’s on all of these? All sorts of stuff! There’s some Shepard classics, like a pretty cool version of “4 Ever Low Man” and a killer “Photograph Burns.” There’s bizarre stuff, like “Reflector” (where Jim tells a story about a bike reflector being mistaken for something extraterrestrial over a pretty good instrumental) and “It Was Reported” (which is hard to describe but has multiple Shepard vocals while someone snaps their fingers to provide accompaniment). The liner notes (more on those later) say that they were going for “weirdo pop” but I don’t really know if I’m necessarily picking up on the pop part of that— certainly there’s a lot of very catchy and hooky material here, but is it necessarily pop? I will say that V-3 exists within Robert Pollard’s “four P’s”: pop/prog/psych/punk. They’ve got a little bit of some of those and a lot of others. Certain songs (“Inside Out Post,” “Voices In The Woods”) I wrote down in my notes as prog-punk. Definitely not a genre combo that a lot of people can pull off, but somehow V-3 makes it work. Roxanne Newman’s songs are pretty interesting, usually pretty dreamy and semi-psychedelic. “Songs Always Linger” and “Twisted Words” were my favorites of those. I especially like the tracks where both she and Jim play guitar— Jim’s style is already pretty chaotic (“Don’t Blame Me” is a good example) and, as the insert points out, Roxanne had no training in guitar, so that makes for a pretty noisy mix (see “It’s Not Easy” and “Prime Minister Keyes”). Two of these albums contain a really good song called “Go On” that’s about as close to true pop as they get (still pretty weird, though!)— they’re different but I can’t say that one or the other is superior.

(available at your local record store or at a variety of distros: Goner, Total Punk, etc.)