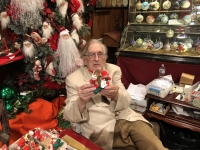 I write this to celebrate a legendary person, who was smart, talented, friendly, driven, joyous, and loving-- Bill Hixson, who was known as Mr. Christmas.

Bill began his life nearly 94 years ago in April, 1929. Born in Berea on the kitchen table, he would change the way many of us would view Christmas, and the past. He had that effect on the world.

Bill was a creative child and soon gravitated to art, cooking, writing and gardening. His mom would give him money to buy lunch and instead he would buy seeds, ferns and plants. He became aware of a horticulture club that awarded class credits, and entered. While he did not win, it moved him in a direction that would become his passion and job.

His parents, realizing his love of flowers and plants, moved to an 11-acre farm in Parma. After trying to raise vegetables for sale didn’t work, Bill went to work for a couple Cleveland florists before going to Knoble Flowers. At this point his old horticultural teacher would have him come back and teach students floral arrangements which he loved. Teaching was something Bill did up until a week before Christmas. That’s right, Bill was still teaching flower arranging right up until the end of his life.

As a young man, Bill was drafted for the Korean War. While he did not go overseas, he gained many life experiences. Although Bill Knoble was his mentor, coming home Bill realized he had outgrown Knoble’s. With $3,000 and help from a friend, he opened his first flower shop and school at 13615 Detroit Avenue. All he had were some tables and chairs, from the dissolution of the Knoble-Hixson School of Floral Design. That first year was tough, the saving grace was a friend who suggested selling Christmas trees, which made a small profit. Then Bill Knoble called to see if Bill Hixson could take over some of his work, especially with the hospitals and funeral homes.

During this time Bill attended the rival FTD Florist Convention, where he met Vernon Smithers who was demonstrating a product to go up against Dow’s floral Styrofoam arrangement foam. Asking Bill what he thought, Bill answered and said, “Not much, it’s not the foam that’s holding the flowers, it’s the chicken wire wrapped around it.” The man asked Bill down to his company for a visit. Bill explained how the product could be made so much better. Vernon took all of Bill’s recommendations and they came up with the green clay now used by most floral arrangers, Oasis. Revolutionizing the industry, Bill covered major cities in every state teaching florists how to use the product.

In the year following the big invention, he became an FTD Florist, and the business took off. Soon they needed more space, and a friend mentioned an old buggy/car wash on Detroit Avenue. Hixson’s Flower Barn was born! Rebuilt with salvaged barn wood from local farms, to fit the name. Always ahead of his time, in the 60s, Bill Hixson’s crew were known as being “a little Bohemian.” Perhaps some of this came from the charming Eunice Sowiak, who had just arrived in Lakewood from Moose Jaw, Canada. She was a young woman who responded to an article, took classes from Bill, and went on to become his trusted partner. Together they built a business that encompassed working with staff from all the major department stores to develop bridal shows. Bill knew that if he could reach a bride early in the planning, he would get the business.

Everywhere he went he would gather ideas, friends and important business contacts. It is hard to talk with Bill and not get motivated. He had that magic. Growing tired of changing the window every two weeks, an employee, Susan Luehers, made the giant Raggedy Ann Doll that still sits in the window 50+ years later.

In 1963, Bill was invited to Japan to teach Western Floral Arrangements. What started with 2 people, became 20, then 100, finally over 1,500 attending his classes. This spurred Bill to write a book in both English and Japanese for his friends and students. Bill continued to go to Japan throughout the years; his love of the Japanese people and culture were evident. One of his proudest philanthropic endeavors was donating to orphanages in Japan.

Bill’s classes in Lakewood also grew. It was during one of his LHS auditorium classes, yes that is correct, an entire auditorium to house everyone, Bill was reintroduced to Nancy Clarke. Nancy had attended a couple classes and was looking for a job. She called the White House to see if they needed a florist, and they said, “No, but what is your background?” She mentioned Bill Hixson Floral Class, and she was invited to Washington for an interview, and a job as White House Florist. Seems Washington had heard of Bill. The following year she asked Bill to join her at the White House, which became a yearly tradition for seven presidential administrations.

Early on Bill learned that he could buy ornaments from around the world OR he could design his own for the same price. This started the tradition of people wanting the latest Bill Hixson designed ornament. Each one, right up to the 2022 pieces contained artwork and designs straight from Bill Hixson.

Always interested in everything going on around town, recently one thing that had really caught his attention were the Templar Cars after an introduction to Dave Buehler, owner of the Templar Museum. He really wanted a ride in one, so that he could draw the experience. Sadly it never happened. Bill’s health started to decline with the death of his dear Eunice a year ago. Longtime friend and employee Mathias, along with Dick Slife, and other friends would stop by and check in on him frequently. Just three days before his death I stopped in to say hello and wish him a Merry Christmas. As I pulled up to the front of Hixson’s, Bill was getting out of his car, having just driven himself from breakfast. I asked how he felt and he smiled and said, “Good, I’ve put on 30 pounds this year, and look forward to that meatloaf lunch you promised, and when do we drive the Templars?”

While I am crying writing this, I know I am not alone. Bill touched so many lives. As a friend I grew up with said, “We all lost a good friend and member of our family and life. Christmas will never be the same."

Godspeed, Bill. I know wherever you are, Eunice and your friends are there, and you’re helping make heaven a more beautiful, loving place. Rest in peace.