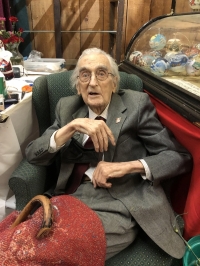 I was sad to hear that Bill Hixson from Hixson’s in Lakewood died yesterday at the age of 93.

I visited the store just two weeks ago and we had a real conversation. He was half-Ukrainian just like me and we discussed the war going on now over there, sharing our personal feelings about it.

Hixson’s was a magical place and it was all because of him. He sold memories and he’s definitely given me many over the years. My son’s Christmas tree is full with just some of them.

These were some photos from that visit.

I asked him if I could take his photo which I did but when I showed it to him he didn’t like the fact that his arms were up so he asked me to take another.

Daniel Sobotka is retired from the US Postal Service.

Retired from US Postal Service