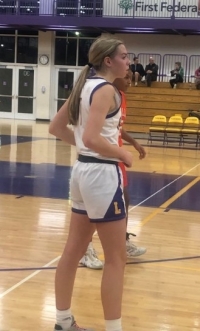 A grinding, back a forth slog between Lakewood and Massillon changed when junior Ally Bookman scored 8 points late in the 3rd quarter, propelling the Rangers to a 53-43 win at the New East Gym tonight. From then on, the Rangers lead never fell below eight points (The Tigers had re-taken a lead mid way through the 3rd quarter). As usual, junior Delaney Garcia was the games' leading scorer (14) and rebounder (10). Lucy Henrikson (3) and Aya McAliffe (5) provided points and solid minutes off the bench. Senior point Guard Sam Hudak had 9 points and was a steady ball handler/distributor against strong defensive pressure. Senior Nette Doran played strong defense and made a critical three-pointer. Senior guard Sydney Hampton scored 4 points and also handled the pressure well and handled the ball well. Senior Ava Carroll grabbed 6 rebounds, scored 5 points, and had her usual strong all-around game.   Senior Jacquie Hudak and junior Sophia Zarbo did not score, but provided solid minutes of the bench. Sophia was another strong ball-handler, and Jacquie played strong defense. The Ranger defeated a tough opponent tonight, and it took the entire team to do it. They boxed out, helped each other on defense, communicated, and gave maximum effort. On another note, the JV's won a thriller (49-46) in overtime. It looked bleak, until Elizabeth Doup hit a 3 at the buzzer to tie the game in regulation. Helen Fraunfelder opening the scoring in OT and the Rangers were on their way.   Basketball is a true team sport. I'm enjoying the Cavs season (despite tonight's loss)—they are a very likable crew. That said, there is nothing quite like rooting for the real home team, the one that grew up and lives here. The Lakewood Rangers are one team, from one town, that gives it their all. Long Live Lakewood.

On Polar Vortex Eve, the Lakewood Ranger Girls warmed the hearts of their faithful with a gritty 53-46 road win over a determined North Royalton squad. Junior Delaney Garcia (pictured) led the Rangers in scoring (18), was a force on the boards and played her usual strong all-around game,, but it took a total team effort tonight to deliver a win. Senior Sydney Hampton (pictured), who has just recently returned to play after recovering from an injury, made key baskets and helped break the Bear press in the tension filled 4th Quarter. Junior Sophia Zarbo (6 points) came off the bench and likes make key plays—and baskets-down the stretch. Likewise, Senior Sam Hudak hit two game clinching free throws that reversed a Ranger cold spell from the line. Junior Ally Bookman scored 3 points, but more importantly she played tough defense on Royalton's best player, Brooklyn Gambino, who still managed to lead all scorers with 20. Seniors Ava Carrol (9 points) and Nette Doran (6 points) played her usual strong all around games.

After Lakewood stormed out to an early 8 point lead, the Bears found their rhythm and after the first quarter most of the game was played with the ranger up by 1-4 points. The Bears briefly took the lead midway through the 4th quarter, but the Rangers never lost their poise, and thats when Hampton and Zarbo made some big plays.