Serials And Cliffhangers: Everything Old Is New Again 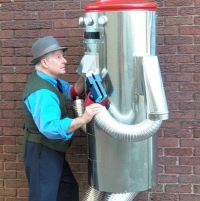 Don O’Malley as Hop Hopkins is menaced by a killer Republic Serial Robot.

Return with us now to those thrilling days of yesteryear...

Long before Marvel and DC comics started churning out one superhero blockbuster movie after another, the theaters of the 1940s - 1950s were jampacked with comic book and comic strip heroes.

Did you know many heroes such as Superman, Batman, Captain Marvel and Captain America had cinematic adventures, filmed in glorious black-and-white, called Serials or Cliffhangers long ago?

Week after week, chapter after chapter moviegoers could sit in a movie house and be entertained on the big screen by the likes of The Lone Ranger, Flash Gordon, Spy Smasher, The Spider, The Shadow, Zorro, Tarzan and the list goes on.

Due to the popularity of radio, pulp magazines, and comic books, the heroes of those stories soon leaped from the radio airwaves and printed pages to live-action movie screens.

Serials and Cliffhangers were chapter plays that played in movie theatres. Telling a filmed story over a series of weekly adventures, usually told between fifteen-minute and thirty-minute installments. Action, adventure and mystery all for one thin dime.

At the close of each week's chapters, we would find the hero or heroine in a dire state hanging off a cliff or captured in a villain's death trap. Have no fear, by the last chapter the hero always won out.

On an unimposing street in the heart of Lakewood, Ohio, Don O’Malley has for the past three years hosted Don’s Breakfast Serial Show. A weekly show, showing old movie serials and cartoons.

My brother Ed O’Malley and friend, Christine Yohn, had pitched a show to air on Cleveland Cuyahoga Community Television. The powers that be, at that time, liked the show idea and gave the project the green light.

Ed later called me the same day, to ask what I thought. I was billed at the time as a “Host-In-Training” on The Midnight Movie here in Cleveland. I thought it was a great idea to show old movie serials and cliffhangers especially because of how well superhero movies were doing in theaters. My brother said “Great, you start in two weeks!” Talk about a cliffhanger!”

“I had grown up in Lakewood watching Ghoulardi, Hoolihan, Big Chuck and Lil John, SuperHost, The Ghoul, as well as The Frank and Drac Show. I could not picture myself dressing up in an elaborate costume to film a weekly show.

So going with the inspiration of the old serials, and the time period they were set in, I grabbed one of my Dad's old suits and my father-in-law's fedora and we filmed The Adventures of Captain Marvel, our first show. The show never aired on Tri-C TV! Due to Covid, the college shut down its television station. Talk about the luck of the Irish!

Don’s Breakfast Serial airs weekly adventures that can be viewed across the United States and as far away as Japan and Australia.

Being a retired FireFighter from Maple Hts, I have plenty of time to put into the show. On average, we film 62 weekly shows and eight-holiday specials along with anniversary shows per year.

I have to locate and view old serials, pick the best copy I can find, then break the chapters down to fit into a two-hour show. On average, serials ran 12 to 15 chapters. Most of my shows run several chapters and we add cartoons and shorts to fill out the time slot. A full serial can run from two to three hours on its own.

I film in my Lakewood home and send the show over to my brother Ed who edits and adds skits, cartoons, comedy shorts, and my opening and closing. Then back to me to send out to the different channels.

Hop Hopkins, a character created for our show, is featured in skits set in Cleveland in the late 1930s pitted against The Crimson Ghost from the old serial of the same name and the killer robot from the serial Mysterious Doctor Satan. Yes, we even have a seven-foot robot. Traffic has stopped several times on my street to watch the filming.

In the past couple of years, fans of old serials have colorized several cliffhangers, gathering more viewers. With the newly colorized public domain shows, we have even more serials to air in the future.

Good or bad, the movies might not have gotten the hero 100% right, with poor special effects, stock footage reused from other serials and films, (watch closely, the same car is seen over and over again driving off a cliff in several serials), always entertaining, it’s all good family fun to watch.

The Hero always wins, evil will once again be vanquished, and the world is safe… well, at least for one more week, until another serial adventure starts up again!

Be forewarned, as a classic TV show would open with “There is nothing wrong with your television set. Do not attempt to adjust the picture.” Don’s show is in black and white at times. Tune in and stay tuned to Don’s Breakfast Serial Show … someone queue The William Tell Overture!