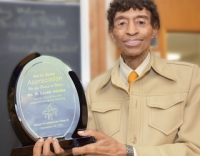 The year was 1997. Grace Presbyterian Church, Lakewood, was beginning to prepare for the most important season on the church calendar, Lent. Special programs were being planned; special music was being rehearsed. The choir was learning some new pieces to be sung during Holy Week. Then disaster hit: the choir director, Roland Wyatt, was told by his doctor that he could no longer remain conducting. Wyatt, much distressed (as was the choir), asked to speak to the congregation on the following Sunday, tending his resignation.

At the very same time, Dr. H. Leslie Adams, internationally renowned composer, decided to leave his larger church and seek employment at a much smaller congregation. He wanted to leave room on his schedule so that he might have more time to complete some of his compositions. He began to flip through the yellow pages and his eye landed on Grace. He decided to “check it out.” As he tells us later, he told no one of his mission; he was just a “stranger off the street.” He was struck by the warmth of the congregation’s welcome to the service. And then Mr. Wyatt announced his leaving...That was twenty-seven years ago. Now Dr. Adams has been, and still is, a cherished member of the Grace Family. “I don’t know how we ever deserved his music, and even more, the friendship of Leslie Adams,” said Elder Cindy Friedmann. “He has often said that we are his family, and we feel the same about him. We feel that it was (and this we believe) a match made in Heaven.”

This year Dr. Adams is celebrating his ninetieth birthday. His Grace Family decided to give him a birthday party of a lifetime. On December tenth, the celebration began with a public concert of a few of his works. First on the program was the Grace Church Choir singing, “The Christmas Lullaby.” This was followed by violinist, Karisa Chiu and pianist Daniel Overley (both from the Cleveland Institute of Music) performing “iii Allegro,” from “Sonata for Violin and Piano,” Reverend Lou Will then introduced Joette MacDonald, a local published poet whose poetry was often set to music by Dr. Adams. After reading one of her poems, Ms. Macdonald introduced Soprano Brandy Birdsong who sang, “Coming Back to Cleveland” and “Daybirth.”

To honor Dr. Adams and all his many achievements Grace Church presented Adams with a plaque to be hung, naming the choir room after him. In addition, a proclamation and trophy were delivered by the City of Lakewood. Many greetings from all over the country were sent to Dr. Adams over the internet and these were displayed on a large screen. The concert concluded with a piece for flute and piccolo called, “Danzo di Tre Bambolo” played by Katherine Calvey and Tamara Kagy. Nicole di Paolo was the accompanist.

After many standing ovations, the Grace Family and the many friends of Dr. H. Leslie Adams adjourned to the social hall where all enjoyed what church folks do best: they sat down to a great meal and spent the rest of the evening visiting with Leslie and each other.