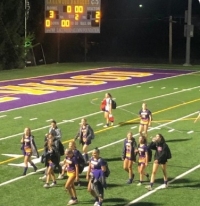 Just when you thought the Lakewood Girls had maxed out on thrilling victories, they outdid themselves with a come from behind 3-2 win over Buckeye. When Mallory Zavatchen blasted a penalty kick into the upper left corner of the net with six minutes remaining, Lakewood took their first lead, which they refused to give up. The Rangers killed the last 6 minutes with stifling defense and once again sent their faithful home happy and exhilarated. This back and forth battle saw the Bucks lead twice (1-0, 2-1), only to be answered by great individual effort goals by Helen Fraunfelder and Nettie Doren.

The game was closely contested, although the Rangers had more good chances and possessed the ball in Buckeye territory quite a bit. The strong, physical Buckeye team was not as fast as Lakewood, making for an interesting matchup. Also, Buckeye dominated Lakewood 5-0 last year, which makes this years triumph all the more impressive. In this great team effort, the three goal scorers had strong games, as did a host of other Rangers, including Sarah McGinley, Luella Darr and Riley Forster. These girls—every one-- played with great heart tonight. Long Live Lakewood.

For Ranger Soccer fans, a beautiful September night was almost smudged by a determined Fairview squad, but in the end, early 2nd half goals by Annette Doren and Rosie Lipka lifted Lakewood to a 2-1 come from behind victory. After being stifled by a staunch Warrior defense in the 1st half, the Rangers came out with high energy, and tallied 2 goals in the first five minutes. From then on, the solid goaltending of Lauren Barber and strong team defense, led by Clare Morrissey, kept Fairview off the board. In a solid team effort, Ava Carroll, Mallory Zavatchen and Helen Fraunfelder made multiple strong runs and kept up the pressure throughout the second half.