Dr. G's Ranger Round Up 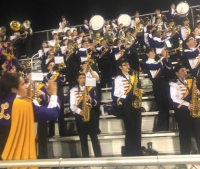 The enthusiasm of the marching band made it feel like a home game.

On a gorgeous fall (in concept!) night made for High School Football, two local community based teams fought hard throughout, but in the end the Lakewood Rangers pulled away to beat host Fairview 28-7.

The entire Ranger squad, with an assist from our massive, loud and proud student section, produced this victory. The defense was stout after Fairview took an early 7-0 lead on the 1st drive of the game, giving up some yardage, but tightening up in the red zone. The offense was led by junior QB Alex Symons, who was the best/most valuable player on the field tonight. Alex took care of the ball, ran for over 100 yards, scored a rushing TD, threw two TD passes, including a critical 4th and 12 strike to sophomore Jaylan Chappell from the 25 yard line.

After the Warrior TD drive, on the Rangers 1st play from scrimmage Symons rolled right, found Eddie Gillick in the flat, and 70 yards and several dazzling moves later (and with a block from Symons), the game was tied. Senior Josh Bohurjak, who played well on both sides of the ball, sealed the game with a 4th and goal TD carry mid-way through the 4th quarter.

The byline of this terrific win goes to the hard working Lakewood Ranger Football Squad, but the story of this fabulous evening had many authors. Our students, sporting the road crew theme, made it seem like a home game with their numbers and enthusiasm. The Lakewood Ranger Marching Band was and is skilled, energetic and brings it every time. The cheer squad are Ranger loyalists and are a force, and our fans bring the cowbells, along with steady loud encouragement for "Schweter," "Chugs" and all our Rangers.

Congratulations to Coach Thome and the entire Ranger squad. They took a punch early on, but stayed poised and responded with 4 quarters of focused effort. Tonight, both schools created the quintessential American cultural experience. The blend of exciting football, music, and the pageantry of Friday Nights under the lights is unique and special.

The Lakewood Rangers are one team from one town, that gives it all.

Last Tuesday, for the first time in a decade, the Lakewood Rangers Golf Team won their 4th straight match, having defeated Normandy, Berea-Midpark, VASJ and Holy Name. The resurgence of the squad has been authored by a spate of young golfers, an experienced senior, and the focused efforts of Head Coach Derek Smith (now in his 6th year at the helm) and assistant Coach Mike Dow. There are not many (if any) LHS students that belong to a country club, but through practice after school and some summer golfing, the squad is on the rise, and the scores are falling. Against Holy Name, the Rangers posted their lowest team score in relation to par since 2015 (174).   Smith, of course, is happy that the team is coming together and smiled as he reviewed their progress to date. Lakewood's only senior, Jack Derethik was the low scorer vs the Green Wave (39) and is "rounding into shape." Sophomore Aidan Smith, new to the team this year, has "added a spark" and sophomore Logan Ellis has "picked up his solid play from last season and carried it over to this season." Sophomore Justin Lacquement has been low scorer several times and has had a solid season to date. Sophomores Leo Soneson and Tyler Volcansek have posted good scores this year, as has freshman Cooper Russell and sophomore Gia Stewart. Other hopefuls for the Rangers include junior Jack Gowan and sophomores Tanner Constantine, Evan Gardner and Titus McAlvey.   Having been a colleague of Coach Smith for the past 16 years at LHS (Social Studies Department) I can say without a doubt that he knows golf, enjoys teaching it, and is willing—happy, in fact-to put in extra time to help his players improve. Playing high school golf, like other sports, offers strong competition and basically advances ones levels of discipline and commitment. It also helps you be all that better at a sport you can play for your entire life. If you are or have a prospective golfer in your family, it would be great to see you/them swinging it for the Lakewood Rangers.

If there was a Pantheon for Lakewood Ranger victories, tonight's 4-3 last half second win over Westlake would be enshrined immediately.

When Mallory Zavatchen—at a dead run from 25 yards out--scored her second goal of the game, an arching shot that found the far upper corner as time expired, she sent our faithful into a frenzy and this game into Lakewood Ranger history. Tonight's seesaw contest had several lead changes that whipsawed the emotions of both teams. This was simply an epic game, a fabulous team win against an outstanding opponent.

Claire McKay got the Rangers on the board as time expired in the 1st half (sound familiar?) with a free kick that eluded the Westlake goalkeeper, caromed off the crossbar and went into the net. Then, when Zavatchen tallied 47 seconds into the second half to make the score 2-0, it looked like the Rangers might have enough to hold on for the win.

Westlake had other ideas, though, and, despite solid play by Goalie Lauren Barber, scored three straight goals in the first 23 minutes of the 2nd half to seemingly take command of the game. In all candor, the Demons controlled play for more than half of the game, and spent a lot of time in Lakewood's end. The favored team had finally cashed in, and the game now had all the makings of "good effort that came up short."

But the Lakewood Student section never lost their edge, and as a reward Sophie Craciun scored a critical goal to tie the game with just over 6 minutes remaining. At this point, any reasonable Ranger fan would be satisfied—after all, we had come back after a disheartening second half, stood toe to toe with a fine team, and could claim a moral victory of sorts. Yet, when Mallory Zavatchen sprinted down the left wing and delivered pure magic with her right foot, the game was transformed from a solid effort into one for the ages. (I have seen more Lakewood Athletic contests that any living person, and this will stand as one of the most exciting and improbable wins in Lakewood History).

Kudos to Coach Nagel and the entire team on tonight's win—it took every Ranger giving maximum effort. Props also to the Lakewood Student Section, who stormed the field and formed a cheerleading tunnel for the players as they excited the field to rejoice with friends and parents.

Though there likely is no Pantheon for high school sports, the warm memories of the home team beating the odds will forever stay with those who witnessed it. The Lakewood Rangers are one team, from one town, that never gives up.