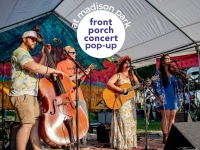 LakewoodAlive is excited to announce a Front Porch Concert Pop-Up on Thursday, September 8 from 6;30 to 8 p.m. at Madison Park in Lakewood's Birdtown neighborhood. Bring a blanket or chair and join us for a free, live performance by Madison Cummins followed by Lea Marra & The Dream Catchers in front of the pavilion at Madison Park.

Lea Marra has been writing and performing music since the age of 10. Her inspirations come from nature and her experience with relationships. Lea Marra has advanced her sound with her band The Dream Catchers. The Dream catchers add great musicality to her songs, which include violin, mandolin, banjo, bass, lead guitar, and drums.

This performance will take place in front of the pavilion at Madison Park. Attendees are encouraged to bring their own chair or blanket.

I am am the Marketing & Development Coordinator at the LakewoodAlive. I enjoy the people, places, and events that make Lakewood a uniquely beautiful community.