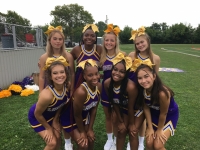 LHS Cheer had lots to be happy about in the season opener.

The Lakewood Rangers football team opened its season with a 34-13 win at John Marshall on a humid Saturday afternoon in West Park.  Lakewood jumped out to an early lead and controlled most of the game, due in part to some key Marshall mistakes. It was the Rangers first-ever visit to nearby John Marshall, which recently had a new stadium built by the Cleveland Browns.

The Rangers held Marshall to a “three and out” on the first possession of the game. The Ranger offense took advantage of a short field, going on a 24 yard touchdown drive to take the lead. Senior Josh Bohurjak capped the drive with a four yard touchdown run with 7:23 left in the first quarter. Junior David Burns added the extra point to make the score 7-0 Lakewood.

The scenario then repeated itself. Marshall went “three and out” on the next drive, and Lakewood again got excellent field position to start a drive. The Rangers went 45 yards for a touchdown, capped by a eight yard touchdown run by Bohurjak. Burns again added an extra point to open a 14-0 lead with 15 seconds remaining in the first quarter.

Marshall made things interesting by striking early in the second quarter. Senior Thiotis Green, a basketball player who was in his first ever football game, broke loose for an 80 yard touchdown run on the first play of the second quarter. The extra point was missed, so the score was 14-6 Lakewood with 11:45 remaining in the first half.

Lakewood responded with another methodical touchdown drive which took over three minutes off the clock. Junior quarterback Alex Symons capped the drive with a one yard touchdown run on third down. Burns’ extra point extended the Ranger lead to 21-6 with 8:23 remaining in the first half. Marshall then put together an impressive drive, going from their own 23 yard line to the Lakewood 20 yard line. However, senior Ranger defensive back Eddie Gillick snuffed out the drive with an interception, keeping the score 21-6 at the half.

The Rangers took command of the game on the opening drive of the second half. They went on a 65 yard touchdown drive, eating nearly seven and half minutes of the clock. Symons finished the drive with an eight yard touchdown run on a key third down play. The extra point was blocked, but the Rangers led 27-6 with 4:32 remaining in the third quarter. Junior running back Don Mikuluk added another touchdown on the final play of the third quarter, and Burn’s extra point made the score 34-6.

Many Lakewood reserve players got playing time in the fourth quarter. The Lawyers kept battling, and Green scored another Marshall touchdown on a 40 yard play with 3:23 left in the game. The extra point made the final score 34-13.

Ranger head coach Tom Thome was pleased to get a win, but sees lots of room for improvement. “We got to get better” he said after the game. “This is our M.O.” he said of the methodical win, “we got to grind it out”. The Rangers have a short week, as they return home to play Bay on Friday night. “It will be a slugfest”, said Thome of the matchup, which will be the conference opener. Bay opened its season with a home victory on Friday night against West Geauga. Kickoff for the game will be at 7pm at First Federal Lakewood Stadium.

Mike Deneen has extensive experience covering sports and community stories for the Lakewood Observer. Mike was a Senior Industry Analyst for the Freedonia Group in Cleveland, Ohio for 17 years. He has appeared on CNBC’s Closing Bell, NPR’s MarketPlace and has been quoted multiple times in The Wall Street Journal. He has made multiple guest appearances on ESPN Cleveland radio. Mike has also written for Inside Northwestern, a website that covers Northwestern Wildcat Athletics.