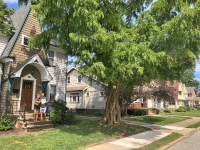 It started with members of Lakewood’s Tree Advisory and Education Board, TAEB, giving a call asking for an idea to raise awareness of Lakewood's tree canopy. The LO as is so often the case said “sure, let’s do it.” After all Lakewood for decades was known as “The City of Trees” with massive Oaks and Silver Maples towering over a canopy that lined every street with shade. If Lakewood was known for something it was trees and front porches. After all in Lakewood, we all have trees, while only 1% of us can legally touch the lake.

So the ideas were hatched at a meeting off all of those interested, tallest, best trimmed, most exotic. Over the course of a couple meetings, ideas were thrown out for discussion then thrown out. The GOAL: Make Lakewoodites aware of our trees and the TAEB. How could we include everyone-- since including everyone is a hallmark of a LO contest and giveaway.

Then it hit us like a wave. “Most Distinguished Tree in Lakewood.” instantly it put the contest in reach of nearly everyone, at least everyone with a tree. "Distinguished" as an adjective allows for a little room for what each person thinks it means. Webster’s says: “successful, authoritative, and commanding great respect.” Okay, but how about the rest? We offered prizes for people to nominate and vote on the trees they believed fit the bill as well. So everyone in the city had three ways to win.

Was it successful? Overwhelmingly! Not only did we receive a large entry for this first contest, but the the trees ranged in height from 12’ to 40’, and all could lay claim to being distinguished.

In the end it is hard to find fault with the results. A Dawn Redwood won overall, a tree even the owners were unsure of. In second place was “Sammy the Spruce” that has a heck of a story behind it, arriving in Lakewood decades ago after being brought from Canada. And one of the few remaining and possibly the largest Ash tree left in Lakewood. I mean how much better can it get than that?

As with all of our contests, people were desperate to enter, nominate, and vote, long after the deadlines closed. Sorry but with the success of this year’s contest the TAEB and LO hope you jump in early and often next year. How do we know it was a success? Because of the comments that came in with votes, people went out and checked out the trees nominated. And let’s be honest, now you know what TAEB stands for, and hopefully the great work they do to keep Lakewood’s tree canopy full, healthy and diverse.

Lakewoodites, your next chance to win, The Lakewood Observer Halloween Decorating Contest, we will be looking for decorations starting October 1, and running through October 26th. Voting will take place October 28th-October 31 with the winner announced November 1. Prizes for decorations, nominations, and voting.

Lakewood, let’s have fun this fall, winter and into 2023!