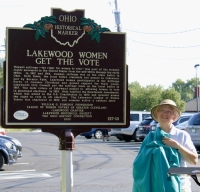 Kathy Kosiorek stands next to the Historic Marker at Lakewood Park celebrating 100 years of League in Lakewood.

As the Lakewood chapter of the League of Women Voters celebrates its 100th anniversary, we take this opportunity to consider the women who have supported and made the organization strong. One such pillar is Kathy Kosiorek, long time and active member of the Lakewood community.

Born in Cleveland, Kathy was brought into the League by her mother, Margarita Madson. While living in Cincinnati, Kathy’s mother came to believe that Ohio needed a better juvenile justice system.  She joined the League of Women Voters and began to study the issue of juvenile detention. When she graduated from high school at the age of 15, she was unable to attend college, but she loved to study and research. She became an expert in Ohio’s constitution and in city charters. She considered the League of Women Voters her university. When the Madson family moved to Lakewood, she brought Kathy, then a high school student, into the League to help with her studies. Kathy found herself a member of the League before she could vote.

Kathy attended library school and joined the Lakewood chapter of the League of Women Voters. She met her husband Andrew at the Lakewood Little Theater and became a librarian at the Fairview Park Branch of the Cuyahoga Public Library system. After the birth of her two children, Kathy remained in the League until 1982 when she returned to work. Kathy maintains that her studies with her mother on behalf of the League influenced the way that she worked. In the League she learned to study all sides of an issue without bias. Results were then presented to the chapter membership and needed consensus before final presentation. This unbiased and disciplined technique was adopted and used by other organizations.

On her retirement in 2006 Kathy rejoined the League. In 2007 Kathy was elected Chair of the Lakewood chapter of the League, a position she held until 2015. During her tenure three local Leagues of Women Voters, the Cuyahoga Area, Shaker Heights and Cleveland Area chapters voted to merge, forming today’s League of Women Voters of Greater Cleveland. “It was a time of transition. We needed a new strategic plan to do 21st century things and increase our visibility.” As Lakewood chapter chair, she presented forums at the Lakewood Public Library, worked with the Lakewood Chamber of Commerce to present the non-partisan candidates nights, as well as welcoming new teachers to the Lakewood schools. Her goal was to provide depth to the organization and find new ways of doing things.

Kathy continued her contributions to the League after stepping down from the Lakewood chairmanship. In 2019 she became part of the team researching the newly installed historical marker at Lakewood Park. She has written extensively for the Lakewood, Rocky River and Bay Village Observer. She is active in her church, at the Lakewood Historical Society, and LEAF. She recently exhibited three works in various media at the Rocky River Senior Center’s annual art exhibition. When asked what draws her to all these organizations, she says, “It’s simple: the people, the purpose of the organization, and the subject matter.”  For now, Kathy is looking forward to the Community Board Relations sponsored diversity potluck supper at Lakewood Park, and the Lakewood Community Festival at Madison Park. She feels that all these activities support the main goal of the League, namely “To keep making involved citizens!”

Please join the Lakewood League of Women Voters for a screening of Iron Jawed Angels on Wednesday, July 20, 2022 from 6:00-8:45P at Lakewood Public Library Auditorium and learn more about how to get involved. American suffragette Alice Paul (Hilary Swank) takes her advocacy to Washington, D.C. to fight for the right to vote. When President Wilson refuses, Paul shows how far she is willing to go for the cause. While challenging the ideology of patriarchy, the film supports the ideology of democracy and exhibits white privilege. The film will be followed by a discussion with Kathy Kosiorek and Pam Smith.

Carol Thums is Secretary of the Lakewood Chapter of LWVGC and wordsmith.

Carol Thums is the Lakewood Chapter of LWVGC Secretary and wordsmith.