Showtime At The Barton Senior Center 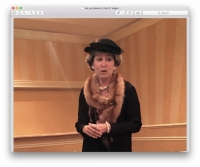 Move over Studio 54! The New York theater, and once infamous, star-studded nightclub, may want to step aside and make way for Studio B! Newly renamed from what was referred to as Channel 167 on the Barton Senior Center's (BSC) in house cable system, Studio B is becoming another place to be and be seen.

The brainchild of Cheryl Shaver, BSC's Manager of Marketing and Development, Studio B personifies the old saying "necessity is the mother of invention." With the BSC on temporary lockdown and group activities halted due to COVID-19, Studio B offers Westerly Senior Apartment residents and BSC members another way to remain productive and involved. It also represents original viewing options for those exhausted by news/politics, game shows and decades old reruns. In addition, this private channel is an effective way to impart information to a large group of citizens within the complex.

One can watch Studio B on tv AND be part of the lineup. Once the channel is activated within an apartment, viewers are treated to programming that runs on a 24-hour loop. Those appearing on air include residents, former BSC associates and people from outside the facility. And, unlike Studio 54, there is no need to be scrutinized to determine if one is "cool enough" to join in.

Moving beyond bodily wellness, Studio B provides a place where the mind can flourish through creative disciplines such as acting, writing and technical wizardry. In turn, residents who miss attending performances at BSC gathering spots can still enjoy them from their living rooms. Pianist Janis Zemzars was the Sunday evening fixture in the Rotunda and now appears on Studio B with masterfully played selections dominated by show tunes. Compositions from Rogers & Hammerstein and Andrew Lloyd Webber are routinely featured. Ron Walden, the MC for the very popular Karaoke nights, now personally sings songs from the genres of gospel, country and rock.

Outside performers have included violinist Mary Beth Ions, Opus 216 (a local violin and cello duo) and reenactments from members of the Lakewood Library's Women in History Program. Recently featured were Mary Elizabeth Bowser (a slave and Civil War spy) and Margaret Tobin Brown ("the Unsinkable Molly"). Just taped were Eleanor Roosevelt and activist and organizer Mother Jones (Mary Harris Jones). The stories of these inspirational and influential females are as relevant today as they were during their lives. For example, Mother Jones often went against the grain to campaign for improving the working conditions of many Americans, such as miners and mill workers. Those impersonating these important figures (Vernice Jackson, Anne McEvoy and Ruth Pangrace) display impressive acting skills and a wealth of knowledge about their subjects.

Retired BSC associate Charlotte Crews has returned with her amusing "Char From Afar" monologues. Former resident Tim Tavcar, who has directed the BSC Singers, hooked up with Char for a skit and in another segment recounted his days in professional theater. Ron and Susan Lucas have resurrected the 1940's radio show "The Bickersons." K Callentine, who volunteered at schools and the Library, now does the same for the BSC Book Nook. Her contribution to Studio B has been readings such as the timeless favorite, "The Giving Tree" by Shel Silverstein.

The group Stories on Paper has now gone virtual with members reading and recording their compositions on camera rather than meeting for round table discussions. Topics have included "a lifetime of hair dramas," "The Town Kid and The Country Kid," as well as former BSC associate Annette Busse's true life "kitchen misadventures." Her portrayal of a mouse rising up from within an old coffee can full of discarded cooking grease is hilarious!

Much of what is seen on Studio B is endearing because of its casual, homespun charm. However, it does not diminish the fact that this population truly has an exceptional depth of talent. While enjoying their "15 minutes of fame," some have nevertheless expressed dismay when viewing themselves and may be critical of their on screen personas!

Visual arts are also showcased on Studio B. Patrice Varzelle, a prolific resident artist, featured a "Dog Drawing Demo" using circles and triangles as starting points. Photography is also represented. One resident shared her pictures of the Zoo's Asian Lantern Festival while another captured the spectacular rainbow seen over Lakewood a few months ago. As images flashed across the screen, they were accompanied by the photographer singing "Somewhere Over the Rainbow" behind the scenes.

Speaking of beyond the rainbow, on a more somber note, a representative from the Hospice of the Western Reserve visited Studio B to conduct a memorial service honoring those who have recently left us. As COVID-19 lingers on, Cheryl Shaver's vision has given BSC members a way to collaborate and stay connected. It also demonstrates that it does not matter what year your birth certificate was issued. At any age, creativity still exists and Studio B has become a venue where what was once confined to a meeting room has now expanded to a larger platform.

The end result is an in-house variety series for everyone to enjoy, enriching the lives of participants as well as viewers. Despite the challenges currently facing us all, those engaged in Studio B have persevered. One could say they are a reflection of the classic entertainment industry motto, "The show must go on!"