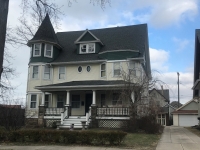 Homeowners all around Lakewood recently discovered large envelopes in their mailboxes with an illustration of a house and the words ”Century Home Recognition Project” on them. Homeowners who received this mailing are living in a house built one hundred or more years ago.

Each year, beginning in 2017, the Preservation Committee of the Lakewood Historical Society has reviewed the records of the Cuyahoga County Auditor to identify houses that were built one-hundred years ago. Because there was no formal recognition program before 2017, the committee searches not only for houses built one-hundred years ago, but also older houses built in previous years ending in the same digit as the current year. Thus these houses also receive recognition. This multiple year recognition will continue through 2026.

One goal of this project is to help build appreciation for why and how Lakewood developed as it did. Lakewood is a city that appreciates and celebrates its past. Today’s Lakewood reflects that history.

Many of the early settlers were farmers and fruit growers who came to the area because Lake Erie kept the climate more temperate than areas farther from the lake. The conditions were ideal for fruit orchards and vegetable fields. Detroit Avenue had been developed into a plank road by the Rockport Plank Company, providing more dependable transportation than the dirt roads that easily became impassable mud, giving ready access to markets for the crops. And land was available.

A second wave of settlers were successful Clevelanders who were looking for a place to build a summer home. The city was hot during the summer and families were searching for an escape from the heat, noise, dirt, and crowded conditions of city life. Lakewood’s country atmosphere and closeness to the city were appealing. Summer estates were built along Lake Erie. Land that once was fields and fruit orchards was being sold. Landowners sensed that a transition was coming.

The transition was the shift from agriculture to industrialization. As more families sought to move out of the city to find better living conditions, land speculators who bought land from farmers ready to quit farming or move to another area, were ready to meet their need for a home away from urban Cleveland but still convenient to it. The landowners began to divide their land and sell to developers who would then section the land into buildable lots. The concept of Lakewood as a city of homes was born.

Another goal of the Century Home Project is to encourage homeowners to set aside some time to give serious consideration to the history of the homes in which they live.

Each year the project reveals the rich variety of Lakewood houses. The six remaining Lakewood houses built in 1880, generally tend to be practical structures reminiscent of country farmhouses and appear to have been built to meet the housing needs of a working middle class family. They appear to have been built for functionality rather than stylistic character. Decorative elements are minimal.

Many of the houses built later in the nineteenth century reflect the Victorian Style. Turrets, gracious front porches, leaded glass in front windows, and ornate decorative trim were often used. Several of the houses recognized from 1890 and 1900 feature these Victorian elements. Often these houses were built on larger, deeper lots.

The bungalow is another architectural style that is found among the houses named century homes in 2020. These one and a half story houses stand out on streets dominated by two-story homes. Because they are shorter than most of the houses around them, they look smaller. But the bungalow is usually longer than it is wide, giving it more square feet than it appears from the street view. The bungalow also features the traditional Lakewood porch across the front of the house. The roof appears large and often continues from the peak over the front porch.

Another type of Lakewood home that was popular and has many examples from 1910 and 1920 is the two-family house. Some Lakewood streets have more two-family homes than any other type of house. The majority of these are houses with first and second floor units, each unit having its own address. The double was a solution to the need for more housing units: two families could live in one house on one lot. When built, the two families living in the double were often related or one unit was rented for income by the owner who lived in the other unit.

The Century Home Project encourages a close examination of a specific year of home building. Lakewood’s neighborhoods emphasize the rich variety of Lakewood’s houses and reveal trends and popular styles of a particular year. It is common to find a particular house design repeated throughout the city. The houses are not duplicates. The same basic building design was used, with the decorative exterior elements changed to create a unique expression for each house.

Lakewood’s History is visible in its houses. This city of homes tells a rich story of building and becoming. Its housing has stories to tell and secrets to reveal. A century is a long period of time. Houses have seen much. Exploring a house’s history can reveal who built it, who has lived in it, how it has changed, how the property was used before the house was built. There is a world of information waiting to be discovered.

John Prim is Chair of the Century Home Project, a sub-committee of the Lakewood Historicial Society, Preservation Committee.

John Prim is Chair of the Century Home Project, a sub-committee of the Lakewood Historicial Society, Preservation Committee