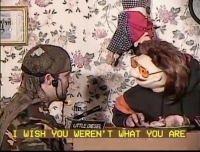 Little Lions’ Den is a new TV show from the kids who brought you Cruelster— created by (and starring) Nathan and Alex Ward, edited by Michael “Yes Yes” Gill and Perverts Again fill-in Nick Kroh, and helped along by others in the world of those bands. It’s essentially a spinoff of their radio show, ppm The Good Nite Show, and it is exactly as weird as you’d probably expect if you’re a fan of everything else these guys have done. It’s pretty excellent.

The basic format is a talk show starring Little Diesel, a puppet who looks and sounds like Mike Trivisonno, and Landon Lammagin, who truly cannot be described better than he describes himself in the first episode: “I look like someone from Hell.” Episode #1, “Our Freakish Hideaway,” is a good introduction to what exactly this show entails. They do a bread test (which really needs to be seen to be understood, but probably isn’t what you’re thinking) and then introduce a recurring segment, Newsline Newsbits, in which they give you the news. Sorta.

Episode #2, “The Pounding In My Head,” however, is where it gets really good. We get our first guest on the show, a rhythm expert who might be called Jonny Donnal (played with great aplomb by real life rhythm expert Noah Depew in his finest orange suit), who’s here to give Diesel the blues, since he lacks them and can’t sing a convincing duet of “Waltzing Matilda” with Lammagin. Spliced in among the episode is also a wild bird cooking segment and another installment of Newsline Newsbits. The rhythm expert part was my favorite— it is tremendously funny— but the whole thing is very good.

The description here so far doesn’t do it justice— there’s the whole way it’s filmed (looks like on old video cameras, maybe?), the random cuts to other things (sometimes disgusting, psychedelically-tuned shots of meat crawling with bugs…sometimes, if I’m remembering this correctly (I now cannot seem to find it when I rewatch the episode, which is terrifying in and of itself) Lammagin dancing, which might be just as scary), the strange synth music in the background, and all the nice tender moments between Diesel and Lammagin. And I think in many ways, words cannot do it justice. You really just have to watch it. In between main episodes, there are “Fireside Chunks,” which are clips (possibly from the radio show) overlaid with heavily edited video clips from the show. They aren’t as great as the real episodes themselves, but they certainly hold you over between episodes.

I actually watch a lot of ARGs and all that stuff, so I’m no stranger to weird videos on the internet. This is truly like nothing else I’ve ever seen. I love it and I’m going to make all my friends watch it. And so should you. Stay tuned for further reviews of future episodes.