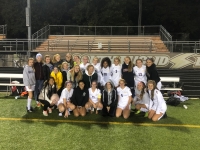 The Lakewood High School Girls Soccer Team finished its 2019 campaign against Hathaway Brown in the second round of the Ohio Division 1 playoffs. After a very competitive game which saw the Rangers down 1-0 at halftime, the very experienced Hathaway Brown team pulled away later in the game to win 3-0. The resurgent Rangers ended the season 7-7-4. The team had exciting outings including a 1-1 tie early in the season against perennial powerhouse and eventual Section Champion Avon. They also tied cross-town rival St. Joseph Academy, 0-0 in a hard, defensive battle. The Rangers had key wins against Holy Name and North Olmsted.

Lakewood was able to remain competitive in every outing with a strong defense led by freshman goalie Lauren Barber who registered 7 shutouts on the season. Lauren was named 2nd Team All-Southwest Conference (SWC) Goalie of the Year. Also named to the 2nd Team All Conference Team was freshman Center Defender Sam Hudak. The defense was led by Senior Co-Captain Emma Hirsch who received the team's Ranger Award for Leadership. Other notable award winners were the Junior Varsity Offensive MVP, Cameron Robertson, JV Defensive MVP Grace Hildebrandt and Senior Co-Captain Emily McIntire and Freshman Jane McGinley as Honorable Mention All SWC. Junior Co-Captain Aubree Nagel was named 1st Team All SWC and Team MVP. Aubree is a three-year Varsity Letter winner and three-time team leading scorer, including 14 goals and 8 assists in 2019.

The Lakewood Girls Soccer Team is extending an invitation to all girls in Lakewood to get out and join the growing crowd of your friends who enjoy soccer every year! Lakewood provides an opportunity to play soccer at every level. If you are just starting out, go to the Lakewood Soccer Association (LSA) site and check out Saturday Soccer https://lakewood-soccer.com. If you are looking for a bigger challenge, Lakewood United Football Club (LUFC) https://www.lakewoodunitedfc.org has many opportunities to play competitive soccer against the other, local community teams. Get in the Game! It's fun and good for you.