This Year In Punk: Reviews Of Recent Releases By Local Bands, Pt. 94 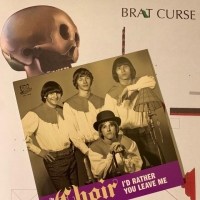 This is the debut full-length LP from Columbus's Brat Curse, as far as I'm aware. They were part of that OH7O comp that came out a couple years back and they covered Brainiac. They do not sound like Brainiac. This is a solid twelve songs of hooky, largely upbeat poppy punk. Some of it heads more towards punk and some more towards pop and a few songs (particularly "Modern Snakes") have just the lightest sprinkle of some emo characteristics, but please don't let my saying that put you off. It's somewhere in the middle ground between a Dirtnap Records kind of power pop/punk sound ("Sweat Pants Lawyer," "Who Do You Call") and, say, Cloud Nothings' "Life Without Sound" ("Under The Gun"). "Psycho In The Future" sounds like their Just Because labelmates Fan Fiction, actually. Pretty good record here. It's consistent throughout. I like the back cover photo that kinda apes the back cover of "Something Else By The Kinks." This doesn't sound anything like that, but I like the photo anyway. 4/5

Here's a real two-sider for you. I think these tracks were recorded sometime after "It's Cold Outside" (and with a slightly different lineup, if I'm not mistaken), but they're every bit as great as that single. "I'd Rather You Leave Me" is very Byrds-esque– lots of twelve-string jangle and great harmonies– and is just a fantastic pop tune. It coulda (shoulda!) been a hit. The flip side, "I Only Did It 'Cause I Felt So Lonely," is equally great; maybe a little less directly influenced by the Byrds, but still very jangly and with amazing harmonies. Cool harmonica solo, too. Unfortunately, there's a bit of distortion throughout, but I think that's probably off the master tape and unavoidable (I can only compare it with that 7" that came out on Bomp and the fidelity on that thing's so bad it's nearly impossible to say). Two power pop/'60s jangle killers here. The only negatives I've got is that I would've preferred black vinyl to the lavender it's on and that instead of including any liner notes or anything to give these songs some context, the entire inside of the sleeve is taken up by a picture of Wally Bryson with Pete Townshend. Okay, that's pretty cool, and pretty funny in how stupid it is, but still. A great record nonetheless. Someone should put out that Cyrus Erie stuff next. 4.5/5

Are you a local-ish band? Do you have a record out? Email vaguelythreatening@gmail.com