A Title Too Long And Not Even All That Funny: Reviews Of Recent Releases By Local Bands, Pt. 91 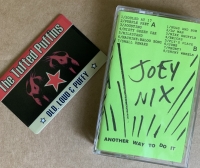 Here's the long-awaited solo debut by Joey Nix, most well-known as the singer/guitarist of Shitbox Jimmy. As I understand it, this album has been in production for somewhere around two years at this point, but ya know what? It was worth the wait. It's not quite the power pop-leaning garage rock of SBJ but more of a lo-fi, quieter version of it. A lot of the material is very reminiscent of late '60s Kinks ("Jousting," "Machine: Baloo Song"; the latter also has obscure lyrics that remind me of New Salem Witch Hunters songs like "Community Project In The Sun" or "Fog") and solo Syd Barrett ("Milkstand," "Fly's Space"). The closing "Shiny Wheels" sounds like something off a Paul Westerberg solo album. There's something very "Bee Thousand" about the whole thing, though more in terms of spirit and execution than actual songwriting. Actually, a lot of these songs remind me of some of Jeffrey Novak's solo albums, presumably because both JNs are working with largely the same influences. (I just want to say for the record, in case someone wants to try and extend this comparison out, Shitbox Jimmy is way better than Cheap Time). I want to know who "listening to bugs and Bob" is about in the song "Bugs And Bob." Who's Bob? Dylan? (That photo on the card, which kinda looks photoshopped, definitely reminds me of some photo I've seen of that Bob before). Pollard? Pfeifer? Nobody at all? Write in with your theories. Joey goes through a few accent changes here and there– most frequently, he borrows Bill Fox's faux-almost-British thing, though "DJ Man" finds him doing…I'm not sure. German? That song in particular is pretty ridiculous, though somehow it works and has its place on the album. My favorites here are "Small Reward" (he gets angry on this one; listen to that "stockin' cans in a pet store!" line!), "Jobs" (which is just such a sweet little song it almost makes me tear up, an effect it shares with several Donovan songs– here you have written proof that I'm a wimp), and "Trust?" which might be the most rockin' tune on the whole thing, or maybe it just seems that way because it directly follows "Jobs" and provides a perfect contrast. Actually, I like 'em all. This is a really good album start to finish. Highly recommended. 5/5

No, you're not misreading that, this was actually released on a USB drive. Why, I'm not entirely sure, as it's not exactly a convenient format. I don't want to have to listen to this through headphones, but my computer speakers are blown, so I either have to run my computer through my stereo system (extremely inconvenient) or burn this onto a CD and listen to it that way (not that inconvenient, just really stupid). Also, where am I supposed to file this thing? I understand that not having to print a full booklet and all that obviously saves money, and it's cool that they can include live videos and stuff, but still, not a format I would ever choose. I've heard that this is also out on CD or is also coming out on CD at some point, but I don't really know anything about that. I was all set to make a dumb joke about how the Puffins thanked every band they've ever played with on here except for Jim Davis, but then 1. I remembered that the Puffins and the Jim never played together, those were two different X__X shows, and 2. I noticed that they thanked me in the list so instead I'll say, hey, thanks! Not quite sure what I did to get thanked, so if this is an attempt at winning me over and tricking me into giving you a good review…well, it might work, I'm kind of a sucker. The font choice used for the PDF booklet is not a good one; it's hard for me to read with my young person eyes, not to make any assumptions about the age of the average Puffins listener. And another thing: I get the joke of the album title, but oh my god what a terrible title. I'll leave the band name alone since I already did that rant last time. Now that I've got all that out of the way, onto the music. "Messin' Up My Mind" is a decent opener, though I'll point out that the New Salem Witch Hunters stole from "Last Train To Clarksville" earlier. The problem with the song is actually the next song, "It Ain't Right," which starts with a riff so similar that you think maybe "Messin' Up My Mind" isn't over yet. This problem arises later on the album with the song "That's Rock and Roll," which has the same riff again and has the same name as an Eric Carmen song (I just generally think you shouldn't put the words 'rock and roll' in your song title, but do what you will). Most of the tracks on here are in a garage-punk style. "Dead By Now" is thematically reminiscent of the Defnics' reunion track, "Look At Me Mom I'm Not Dead," "Bang Bang" is, I suppose appropriately, the fastest tune on the record and is also not a Cher cover. I'm not a huge fan of the novelty-type tracks like "My Doo Rag Will Hold My Brain In," which is I guess their version of "People Who Died"– although I think he names a couple of Splatter Pigs members in there, which is pretty good. I appreciate the 'never too old to rock' sentiment of "Hip," but again, I don't know if I care for the humor of it ('somebody's gonna break a hip tonight!'). The shout out to The Alarm Clocks is excellent, though. "I Never Lied" is a really good and catchy garage tune and there's a really bizarre effect on the second half of the guitar solo, which is really cool. My favorite track here might be "In America," which is a cool, mildly psychedelic thing, though certainly not with 'peace and love' kind of lyrics (I think this one was on a CD I reviewed three years ago, so I apologize if I'm repeating myself). I don't love the production, but I'm always whining about production and I just want everything to sound raw. I will say, the bass sound is really not what I would've gone with. Here is what this band's saving grace is: they've got energy. A lot of drummers in their 20s aren't nearly as good as Markymoon is here. Overall, a decent garage-punk album. There's nothing groundbreaking (okay, well, I've never heard that one guitar effect before, so there's that), but it's a rock album and they know how to rock, and sometimes that's all ya really need. 3.5/5