Where Are The Kids Tonight? At An Emo Show, Probably: Reviews Of Recent Releases By Local Bands, Pt. 89 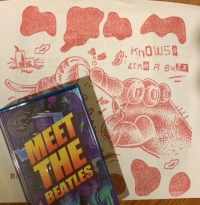 This is a local entry into the Lumpy Records drum machine punk sweepstakes kind of thing, or something like that. I'm not sure I'm supposed to say who this is (he includes a picture of his cat and credits himself as "this feline's roommate") lest he face legal action from the group that shares his name, but he's been reviewed in this column many times, so you very well may be familiar with him and his work. Anyway, this tape is, as I said, drum machine punk of the style that's been very popular in the underground scene the past several years. Several of the songs have technology themes, like "Talk Dirty To Me (Siri)" and "The Webcam Of Dorian Grey." I'm told that at some point, these Beatles give you instructions on how to properly listen to a Spotify playlist, but the already dubious sound quality as is the norm with this kind of thing (I was sent a couple advance tracks, so I know how the "master" versions sound) is driven to complete no-fi by the dub job on the tapes (my Side B is significantly louder than Side A), so I really have no idea, but I'm going to choose to believe it. My favorites here are the ripping opener "He Died Online," the very Devo-esque in the way that all bands like this are Devo-esque "Lies (And The Truthers Who Believe Them)," the dark new wave of "Insidious City," and the slower one near the end of Side 2, which I think is "The Webcam Of Dorian Grey." If this is something of a spoof of the aforementioned drum machine punk style, it does a very good job of it. Stick this on a tape with the Coneheads and Neo Neos and CCTV and all those kinds of bands and it would fit right in. I'd go so far as to say Lumpy could easily get a good 7" out of this tape. On the other hand, if this is meant to be taken completely seriously (or as seriously as it can be taken with songs like the ones here), I don't know. I guess it's still good, but I like it better if it's at least a little bit of a spoof, ya know? I'm assuming that's what it is. Same with the band name: if it's a joke on the fact that there seems to be a bunch of bands all going around with the same names despite the fact that it's incredibly easy to find out if a name's already in use these days (which, taken to its very extreme could, I suppose lead to one saying, "You know what we should call our band? The Beatles!"), then it's pretty funny. If he's saying, "No, I just want to call it The Beatles," again, I just don't know. I'd also like to hear the lyrics better, but I don't know whether it's because of the mix or just the dub, so I don't know how much I should take off for that. Anyway, if you like the bands I mentioned and that whole kind of thing or you just wanna hear something goofy but pretty good, you should see if you can find this one. Good luck. 3.5/5

(I have absolutely no idea where you're supposed to get this one. Try asking a local record store?)

I was a little disappointed to learn that the A side of this one was not a diss track about me (unless it is and it's just really subtle). This release is the debut of the new Knowso lineup and indeed, it does sound slightly different from the last record. How so? I think it's a little less aggressive and tends toward a weirder kind of punk sound. I know this is a total cliche to say and I've probably made fun of people for saying this about this band and other Cruelster-related bands in the past, but it does sound a bit like Hardcore Devo, at least rhythmically. "Like A Buzz" is pretty good, especially the lyrics. "Physical Freak" on the flip doesn't do as much for me, but it sounds like Knowso and hey, it's a B side anyway. Overall, this 7" is lacking some of the punker, anthemic qualities of the 12" (this sounds like a bizarre thing to say, I know, but come on, "No Patience?" "King Of Things?" These songs are anthems in my little world) in favor of the more new wave-flavored stuff, but it's not bad at all. "Like A Buzz" is certainly worth it. And also, it is a different band than is on "Look At The Chart." Mike and Jo are two punk guitarists replaced by Adam, who is one not-exactly-punk guitarist. It only makes sense that its different in the way it is. I like that Nathan Ward's name is spelled entirely normally, Adam Zegarac's is spelled in a way that makes it a little easier to pronounce, I guess, and Jayson Gerycz has an extra 'cz' appended to the end to make it a bit harder. Great art by Nathan as usual, even if he does continue to destroy the scene a little more with each record cover he draws. 3.8/5