Who Designed The Lakewood Logo? 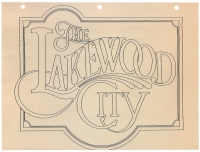 The original concept by Jim Larsen.

Mayor Sinagra has set into motion a Community Development Program that included the “Storefront Renovation Program” with the idea of improving the exterior street image of Lakewood’s commercial roads.

As I was considering just how to help create this “renaissance moment” for Lakewood……I observed that the “entry signs” were just rectangular white panels with words to announce events (PTA meeting, Jan 6/Food Drive/etc)….there was no actual entry sign.

I wanted the residents and guests to our community to “feel the pride” as they entered our home.

So…..I started sketching out some ideas that would represent both some traditional roots  (using a serif type letter) and some letter movement (the word “Lakewood” seeming to drift lazily upon the water) …. a strong “wave” comes in from the left side… then softens to 3 smaller waves  as it goes over the word “City”……and finally  spills out on the shore of the north coast of “Ohio”.

I wanted to change the name from “the City of Lakewood” to “Lakewood City” so I set the word “Lakewood” over the word “City” but Mayor Sinagra said “no” to the change in word order…but he LOVED the graphic concept and directed me to replace the word “City” with “Ohio”. I wasn’t originally in agreement with that idea….but in time, I would realize how important it was to have “Ohio” in our logo.

Fast forward in time (maybe 5 years later?) and there will be a confrontation between the New York Times (I believe) and the City of Lakewood because the City had decreed that they would no longer accept random “newspaper boxes” on the street corners of Lakewood. The Times sued…with the City winning each of the appeals up through the Supreme Court of Ohio...with that victory for Lakewood...newspapers around the country are now showing our Lakewood Ohio entry signs with the story of the Times loss of free will locating their newspaper boxes, and “Lakewood Ohio” was now officially “on the map” of front pages everywhere.

Some interesting “post scripts” to the logo...I was extremely disappointed when somebody (years ago) realized that our entry signs would be a great way of “advertising”...suddenly, our entry signs were getting “a beard”…panels of names began to appear below the entry sign graphic...”Home of St Edwards High School”….”winner, best ice cream in NEO”...the whole point of my original design was to keep it simple and move away from “advertising”...(thankfully) those well meaning “beards" are gone!

Another funny one was when Madeline Cain asked if she could change the color green on the signs to match her own brighter green campaign colors to help with her re-election.

The signs today have since been “simplified”…they are no longer sand blasted wood with gold lettering...the “water wave” that intentionally extended the logo beyond the left edge of the frame was eliminated...and the gold balls that were the exclamation points to the top of the sign post and the horizontal bar holding the sign panel have been eliminated...but...it’s still the same logo...

I have been fortunate to keep my offices of Larsen Architects in Lakeshore Towers (Cove and Edgewater) for over 30 years in the incredible 1929 Art Deco dining room (which we restored) of the original Lakeshore Hotel (built as the finest hotel between new York and Chicago).

I smile every time I cross the bridge and see my sign welcoming everyone to this amazing community...and the stone I threw in the pond some 40 years ago has had a lotta ripples...in fact...every house in Lakewood now has my artwork on their garbage can!

I have left my mark!