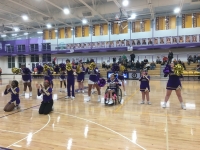 The Sparkle Effect joined the LHS cheerleaders at halftime of the Rangers win. The LHS pep band also entertained the crowd.

The Lakewood boys basketball team rolled to a 72-50 win over Westlake on Tuesday night at LHS. The victory lifts the Rangers’ record to 12-6 on the season. Senior Tommy Sala led Lakewood with 19 points.

Lakewood started pulling away in the second quarter, which started with a 7-2 Ranger run. The teams played evenly for the rest of the half, and the Rangers took a 32-26 lead at the break. Lakewood went on a 10-1 early in the third quarter, putting the game out of reach. The lead ballooned to 55-34 at the end of the third period.  Both teams were able to use reserve players in the fourth period as Lakewood went on to the 72-50 victory.

Smith finished the game with 16 points; senior Zion Kolodynski-Darby had 8 points; seniors Delvaun Phillips, Alex Bransteter, and Christian Marcano had 6, 5, and 5, respectively. The Rangers return to action Friday night at home against Midview. The SWC conference matchup is scheduled to tip at 7pm, following the 5:30pm junior varsity game.