Opioids: Winners And Losers In The Crackdown On Prescribing 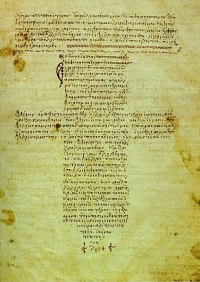 A 12th-century Greek manuscript of the Hippocratic Oath.

“First do no harm.” Those are the first four words of the Hippocratic Oath. So, what is the role of physicians in providing vs. withholding opioid medications for patients with chronic pain? And what about the burgeoning opioid epidemic?

These were some of the topics discussed at the public policy forum "Chronic Pain in the Post-Opioid Era" held at Lakewood Library this past Thursday. The presentation was moderated by Plain Dealer reporter Brie Zeltner, who has written extensively on the opioid crisis in Northeast Ohio. She was joined by panelists Dr. Adam Hedaya, Founder, Cleveland Pain Care; Dr. Theodore Parran Jr., Co-Medical Director and Educator, Rosary Hall, St. Vincent Charity Medical Center and CWRU School of Medicine; and patient Larry Herbert, who has struggled to manage chronic pain triggered by serious and ongoing medical issues.

We’ve seen the shocking images – the body bags, law enforcement officers falling ill from exposure to potent synthetic drugs, the hand-wringing parents mourning the loss of daughters and sons whose lives were wrenched away by addiction. Since the early 90s, the ravages of the opioid epidemic have been reflected in ever-climbing numbers of fatalities and new cases of addiction. According to preliminary U.S. data released by the CDC, 72,000 people died of drug overdoses in 2017 alone – a 7 percent jump from 2016. Another 22 million men, women and children in this country are locked in the deadly grip of opioid addiction.

But what are killer drugs for some are vital, life-improving agents for others. People with pain due to chronic diseases that can’t be cured and those with serious injuries, multiple surgeries or other medical conditions rely on pain medications to improve their quality of life. These patients – dubbed “legacy patients” – face terrible challenges when their prescribing physicians move away, fall under scrutiny for dispensing pain drugs or whose practices are shut down all together.

Dr. Hedaya traces the origins of the opioid crisis to post-surgery prescribing of powerful, synthetic and highly-addictive opiates such as Dilaudid. Although the pain-numbing effects typically last four to six hours, the doctor explained, physicians were trained to provide post-operative patients with Dilaudid every two hours, causing them to develop tolerance to the drug and requiring exponentially higher doses to obtain pain relief.

“Adding opiates is impairing a person’s ability to regulate pain stimuli within their body,” Dr. Hedaya commented. He also commented that addiction is not merely a physical state, but rather a confluence of neurobiological and physiological processes. Patient’s pain should be managed by professionals with a deep knowledge of these processes, and not by primary care providers, he opined.

Mr. Herbert, who has undergone 70 surgeries and suffered from complex orthopedic issues spanning 12 years, provided a stark example of the challenges patients face in the post-opioid era. The morphine and oxycodone his physician prescribed provided Mr. Herbert with vital relief from his severe and ongoing pain; however, when the practice was shut down, the patient was suddenly cut off from his medication lifeline. Fearing repercussions from prescribing potent pain drugs to a long-term user spooked potential providers; one after another refused to treat Mr. Herbert, who subsequently underwent the agony of non-medically supervised and sudden withdrawal from his pain medications.

Current medical guidelines recommend decreasing pain medication doses gradually over days and even weeks to prevent patients from developing serious symptoms such as anxiety, insomnia, hot and cold sweats, abdominal cramping, nausea, vomiting and diarrhea, among others. These side-effects can last for weeks in patients whose medication is abruptly cut off. “Legacy patients are not addicts,” Mr. Herbert told the audience. “There are people who will get no relief [from their pain] other than by an opiate medication.”

Dr. Parran, who has been treating patients with alcohol and drug addiction since the 80s and co-directs detoxification and addiction treatment at St. Vincent Charity Medical Center’s Rosary Hall, commented on the alarming rise in patients in need of substance use treatment; Rosary Hall went from treating an average five patients a month in the 90s to a staggering five a day in the current tsunami of opioid addiction. This fact, however, is not an indication that the number of U.S. substance users is growing.

“If you take 100 people and give them all opiates, 10 will develop addiction,” Dr. Parran stated. “But the same is true of beer,” (i.e., on average, one in ten beer imbibers will develop a drinking problem). He said that this 10 percent rate of addiction has held steady for more than 70 years, since men returned from WWII battlefields and women were more apt to drink.

Dr. Parran compares addiction to the insatiable blood-sucking of plant Audrey II in the film "Little Shop of Horrors," and to the character Gollum in J.R.R. Tolkien’s "Lord of the Rings." “The ring took over every meaningful relationship in his life.” The problem with today’s addiction, he explained, is the substance that is being used, noting that 30 or 40 years ago less lethal substances such as marijuana and alcohol were the drugs of choice.

“Opioids have a massive effect on the brain,” Dr. Parran explained. “People have major withdrawal…it makes people feel like they are literally dying. It takes months, even years for the brain to recalibrate to the place it was before the opioids.”

In closing, Dr. Hedaya called on “the addiction and psychiatric community to rise to the occasion” by upping the number of patients they treat and sharply curbing the prescribing of opioids. Mr. Herbert, ever the patient advocate, rejoined, “People do not deserve to be taken off their meds if they are doing well on them.” He added, “People are being seriously hurt, committing suicide.”

Lise Millay Stevens has been a writer and editor in the health care field for more than 25 years with experience gained as a deputy director in the communications bureau of the New York City Department of Health, a senior press associate and managing editor with the American Medical Association. She moved from NYC to Lakewood in 2012 to care for her mom, who recently rejoined the angels. She lives in the home she has co-owned since 1992; her only child has whiskers, is furry and four-legged, and provides sunshine, love and laughs on a daily basis.

Lise Millay Stevens has been a writer and editor in the health care field for more than 25 years with experience gained as a deputy director in the communications bureau of the New York City Department of Health, a senior press associate and managing editor with the American Medical Association. Her career in medical writing and editing started when she became the editorial associate of Neurology, a journal run out of University Hospitals of Cleveland for ten years. She obtained her Master's of Spanish and Bachelor's of French from Cleveland State University.

Lise moved from NYC to Lakewood in 2012 to care for her mom, who recently rejoined the angels. She lives in the home she has co-owned since 1992; her only child has whiskers, is furry and four-legged, and provides sunshine, love and laughs on a daily basis. Her hobbies are reading, photography, writing, hanging out at various local establishments with friends/family and sharing a meal and a brew. Her newest adventure is studying to be a professional cat behaviorist.