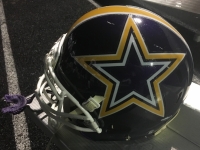 Rangers fell 49-14 to Midview on a chilly night in Grafton.

The LHS football team suffered a disappointing loss on  Friday night, falling 49-14 to Midview. Turnovers and mistakes doomed the Rangers, who were coming off their first win of the year against Westlake. Lakewood senior Kyren Jefferson provided the highlight of the evening, setting the new school record for pass receptions in a season. The previous record (48 catches) was set in 1988 by Chip Chambers.

Lakewood junior Milan Jackson made a strong return on the ensuing kickoff, taking the ball all the way to the Midview 34 yard line. A pair of pass completions took the Rangers to the 20 yard line, where they seemed ready to tie the game with another score. However, Middie defensive back Zac Gill intercepted a Ranger pass in the endzone, snuffing out the drive. Three plays later Midview scored another touchdown, this one a 52 yard pass from  Gooch to senior Edwin Ralat. Midview led 20-7 with under three minutes remaining in the first quarter.

Midview scored twice more in the first period to take a 34-7 lead at the break. Heavy rain began   falling in the second quarter, soaking a chilly crowd. The lead grew to 49-7 at the half, setting the OHSAA “running clock rule” in motion for the second half. The Ranger offense mustered a pair of long drives in the second half, including an 84 yard touchdown drive early in the fourth quarter. That score made the final margin 49-14.

The Rangers return home to finish their season next Friday night against North Ridgeville. Those Rangers defeated Westlake 42-21 on Friday night to raise their record to 3-6 on the season. Kickoff is scheduled for 7pm at First Federal Lakewood Stadium.