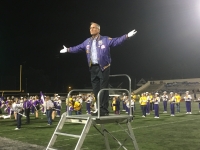 The LHS football team fell 56-7 to Avon on Friday night at First Federal Lakewood Stadium. The game was part of the school’s Homecoming festivities, and was preceded by the annual Spirit Parade. The game was attended by a large number of LHS graduates, and many alums participated in the marching band at halftime.

The game started well for the Rangers, who faced a stiff challenge from the 5-1 Eagles. Junior linebacker Spencer Reynolds intercepted an Avon pass on their first series. The Ranger defense stopped Avon again on their second possession, forcing a punt. A Lakewood fumble gave Avon the ball at the Rangers 8 yard line midway through the first quarter, setting up the Eagles for an apparent go-ahead score. However, Lakewood again thwarted the Avon offense, stopping the Eagles on four plays and keeping the game tied at 0-0. Lakewood took possession at its own one yard line with 5:20 remaining in the first quarter.  Junior quarterback Albert Wilhelmy hit senior Dwighski Jackson with a 14 yard pass to escape the shadow of the end zone. Two plays later Wilhelmy connected with sophomore Evan Hampton on a 59 yard completion that put the Rangers in scoring position at the Eagle 24 yard line. The Homecoming crowd was elated, as the Rangers were playing evenly with heavily favored Avon.

Disaster struck two plays later when Avon safety Niko Pappas intercepted a Ranger pass and returned it 90 yards for an Avon touchdown. The Eagles suddenly had a 7-0 lead with 2:58 remaining in the first quarter. The next two Ranger possessions also resulted in interceptions, and Avon built a 21-0 lead by the end of the first quarter.  Avon used the momentum to build a 49-0 halftime lead. “You can’t turn the ball over against a good team like that” Ranger head coach Tom Thome said after the game.  The second half was played under the OHSAA “running clock” rule. Lakewood scored early in the fourth quarter, when Wilhelmy capped a 64 yard touchdown drive with a 20 yard touchdown pass to Hampton. The final score was 56-7.

Lakewood returns to action next Friday at home against Westlake.  The game, scheduled for 7pm, is designated as “Youth Night”. Middle and Grade school players and cheerleaders will be in attendance. The Rangers last victory came against the Demons last season in Westlake. The Demons, 1-6 this season, lost 42-28 to Midview on Friday night. Lakewood’s final three contests will be against teams with losing records. After Westlake, they travel to Midview to face the 1-6 Middies.  The Rangers final game will be at home against North Ridgeville, which is currently 2-5.