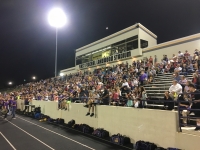 The beautiful late summer evening helped attract a large, enthusiastic crowd. This included the  student section, which wore patriotic colors in a “USA” theme.  Olmsted Falls scored first, as senior Jack Spellacy made a one yard touchdown run with 8:36 remaining in the first period. Junior Jake Politowski made the extra point, making the score 7-0.  Ranger sophomore Evan Hampton then excited the crowd with a 38 yard return on the ensuing kickoff. However, the drive stalled and Olmsted Falls regained possession after a punt.  Olmsted Falls then stretched the lead to 14-0 on a 56 yard touchdown run midway through the period. Lakewood moved the ball into Bulldog territory on the next possession, but a fumble ended the drive. The Ranger defense then forced a “three and out”, and the first period ended 14-0.

Bulldog senior Braden Galaska made a trio of crucial plays in the second quarter to put the game out of reach. First, he caught a 25 yard touchdown pass from senior quarterback Teddy Grendyznki to make the lead 21-0. Then he intercepted a Ranger pass on the next possession, setting up Olmsted Falls fourth touchdown drive.  Then he made a 78 yard punt return to set up another TD which made the score 35-0.  Despite forcing a late fumble in the half, Lakewood trailed 42-0 at halftime.

In the third quarter, Ranger quarterback Albert Wilhelmy completed a 16 yard pass to Milan Jackson to move the ball into Bulldog territory. Ranger senior Kyren Jefferson then took a bubble screen from Wilhelmy and ran 46 yards for Lakewood’s first touchdown of the game. Senior kicker Justin Crislip followed with the extra point to make the score 42-7. Lakewood struck again in the fourth quarter, as Wilhelmy hit sophomore Evan Hampton with a seven yard touchdown pass to make it 42-14. That was Hampton’s third touchdown reception of the season.

“The kids continue to play hard” head coach Tom Thome said of his Rangers after the game. He continues to be pleased with their effort, even when faced with difficult circumstances. Next week the team travels to Avon Lake to face the Shoremen on Friday night at 7pm. Avon Lake is 4-0 on the year, defeating Westlake 42-7 on Friday night in Westlake.