The Other Side Of Politics 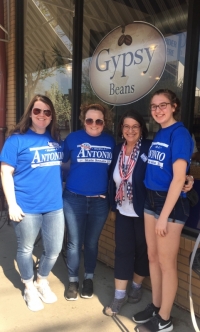 On the campaign trail! From left to right, Taylor Phillips (legislative aide to Rep. Antonio), Nicole Parke (campaign manager for the May 8 primary election), Rep. Nickie Antonio, and Elizabeth Halko.

There is, contrary to popular belief, another side to politics. A brighter side. A well intended, positive side. A side that’s not always completely political, but personal, and a great opportunity for adventure. A large part of my identity has been shaped from my experiences working on political campaigns. Quite frankly, my acquisition of political knowledge is perhaps the smaller portion of all of the information and insights I gained from my lit-dropping, fundraising, postcard and article writing endeavors, and I owe thanks beyond words to State Representative Nickie Antonio for providing these and other experiences to me, literally at my request. Without further ado, I have stories to tell you…

Someone asked me once how I felt when the first candidate I worked for lost her election. I replied with the typical oh-I-was-really-disapointed-but-we-did-everything-we-could kind of answer and left it at that—but obviously that’s not where this tale ends.

Former Lakewood City Councilwoman Cindy Marx realized in no extended period of time that I had experienced relatively little of the city I’d lived in my entire life, and she avidly introduced me to her diverse group of volunteers, supporters, and friends—they were black, white, old, young, straight, gay, male, female, from Lakewood or from India. They were captivating.

She organized our meetings on the eastside of Lakewood where I had never truly been before, we would walk through the local businesses and leave campaign cards, and I remember being profoundly awestruck with everything I didn’t know was here. One day we visited Indigo Perfumery, a tiny perfume store which looks like it’s been dropped out of Paris; it smelled of patchouli, orange zest, and wildflowers, the room sparkled as the sun reflected off the plethora of small glass bottles and it created an image of beauty that has yet to dim in my mind. I met artists and went to swanky cafes and felt these new and authentic vibes that filled my soul and became an inseparable part of my own.

Yes, in this experience I learned about lit-dropping, local politics, fundraising, and issues, but I also began to value diversity and originality in a way that I never had before. I understood, quite simply, that it is one thing to superficially “know” the value of diversity and an entirely different novel to internalize, see with your own eyes, experience with physical and tangible interaction, the value of diversity. I found within myself an undeniable affection for the small, the original, the unknown, the out of the box, the pure and the kindhearted. On these principles I have built the essence of who I am.

I had significantly more logistical luck on the second campaign I worked on—Nickie Antonio for State Senate—and by “logistical luck” I mean that our portion of Senate District 23’s voter pie panned out higher than our opponent’s on election night. Aka, we had a solid win. In the days I spent working on this campaign, I found myself wholly inspired by the neighborhoods of Cleveland I walked through—Old Brooklyn, West Park, Gordon Square Arts District, Ohio City in particular stuck out to me—it’s full of small, original, colorful homes and quirky apartments, it’s bright, with courts that lead between roads, some houses less kept than others, but nonetheless homey in nature, unique, and virtually unknown to me before this experience.

At the end of each day on the campaign trail, I’d feel thoroughly fulfilled after working with people and for someone who shared a common set of values and whose end all be all goal was to leave the world and our communities in a better place than before. And, as someone who is a writer, an artist, and a thinker, the interactions I had with all of these different people and places left me swirling with ideas and thoughts and vibrations to express. So yes, I learned about how a campaign office operates, how phone banking is done, about more issues, but at the end of the day all of these experiences became fundamental layers of the person I am today, building upon what I already knew about myself and showing me new and unique facets of my identity.

Win or lose, I’ve evidently discovered that political campaigns have the potential to be more than just the task of convincing a populace to vote for someone. I’ve also noticed that this “more” is not just personal experiences either, like the ones I’ve just described. A campaign done right does not simply advocate for the person it is aiming to get elected; it advocates for the ideas they stand for and makes apparent the issues and causes they feel are important. That being said, even if you lose, a powerful statement about problems, initiatives, and perspectives on them has been made, planted in the minds of the public, and left there to percolate. Suddenly, all that your candidate stands for has been infused into society, brought to people’s attention, and with that the real possibility for their discussion and debate is made available. Yes, the bottom line goal of a campaign is to convince you and others to vote for someone, but when done well, they have the inherent prospective to spread ideas, inspire discussion, and make us aware of what the real issues facing society are and who the best person is to address them.

Now, obviously not all campaigns are run this way or create this kind of impact. I have very stringent standards for who I work for and what causes I give my time to, as a seventeen year old high school student, there are plenty of other things I could be doing—there are politicians in all parties whose motive are elsewhere and not in the best interests of those they serve. I have looked to join campaigns and leaders that embody truth, honesty, transparency, educated debate, and a genuine desire to improve society and the lives of those who live within it. In my experience in the political world, State Representative Nickie Antonio has always possessed these qualities and she runs her campaigns in accordance with these values—despite our success in the May primary, she does have a Republican opponent in the general election, and we’ll need all hands on deck to ensure another success.

Of course, I encourage you to jump on board as many quality campaigns as you can, and I hope that my stories have inspired you to consider the other side of politics, sometimes hard to find, but nonetheless still present.