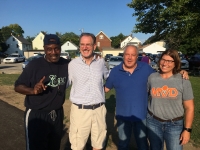 LOBC, a community organization that promotes outdoor hoops for Lakewood, spent years lobbying City Hall for the return of a full outdoor basketball court. Half court hoops have opened in recent years, with two at Lakewood Park and one at Wagar Park. LOBC leaders who lobbied many years for outdoor basketball include Roger Sikes, Manny Mahome, Casey Davis, Peter Grossetti, Art Gold, Nadhal Eadah, and Stephanie Toole. Ward 4 Council member Dan O’Malley, in whose ward the court resides, has been a strong advocate inside City Hall for the project.

Unlike previous basketball courts at Madison Park, the current version is located in the southern end of the park next to the softball field and LEAF Community Garden. The new location is designed to reduce noise impact for houses next to the park.

Sikes made opening remarks at the official ribbon cutting ceremony. Mayor Summers also spoke, as did O’Malley. Council members Tristan Rader and John Litten also attended the event, which included a cookout prepared by members of the Lakewood Fire Department. The ribbon was cut by a pair of Lakewood youths, and then players took to the court.

LOBC credits local kids for their lobbying efforts. “We really want to thank the kids who joined us these last two years,” said LOBC’s Casey Davis. “Their willingness to be involved and actually stand and speak is what made the difference.” The group hopes to continue growing the number of basketball courts in Lakewood. “LOBC looks forward to building on this momentum to expand access to high quality public basketball courts throughout the city,” said Sikes. For more info on LOBC, visit their Facebook page or their website at www.lobc.org.