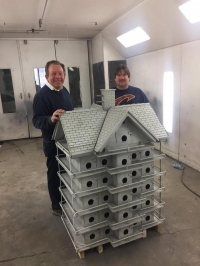 After the Purple Martin House was brought down from the pole (park employees used a crane – the winch for lowering and raising the house appears to have been broken for many years and needs to be replaced or repaired) it became clear a lot of repairs were needed to the structure after nearly 30 years of not being maintained.

The 54 room Purple Martin House, which is much bigger than it appears high up on the pole, is made of aluminum and was built by Stephen Dubiel beginning in the late 1960's and took approximately three years to complete. Mr. and Mrs. Dubiel donated the Purple Martin House to the city in February of 1989 in memory of former Mayor Frank Celeste.

After the house was thoroughly cleaned, it was taken to the studio of renowned Lakewood sculptor Stephen Yusko where it was repaired and missing parts were custom fabricated and replaced. He replaced and repaired railings as well as re-welding broken joints.

After the renovations to the house were completed, the old coats of paint were removed at Newbury Sandblasting. The house then received a fresh coat of paint from Jim Mossbruger and Jack Craddock at Miracle Auto Body located in Lakewood.

Jim Mossbruger at Miracle Auto Body has generously donated their time and materials for the paint job on the The Celeste Martin House.

Currently the entire house has a base coat of white. The plan is to paint it further with additional colors as it was originally but the base coat needs to cure for a minimum of 30 days. However, we need to get it reinstalled at the park soon, so it will be brought back down in the Fall after the Purple Martins leave for Brazil, and have additional painting done to it.

To date, several thousand dollars of private funds have been used for these repairs and associated costs. With the help of The Lakewood Foundation, a page has been set up where you can donate to keep this project moving forward.

Follow the links below for more interesting history and information regarding Mr. Dubiel, the Purple Martin House, and the Lakewood Urban Bird Society.

Read More on Flora and Fauna