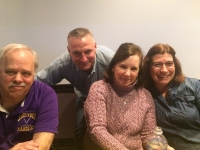 Many of the LHS athletic coaches volunteered at the event, which benefits LHS student-athletes.

The LHS Athletic Boosters "Night at the Races" fundraiser on March 10 was a success. The 14th annual event raised over $20,000. This money helps to keep Lakewood's pay-to-play fees among the lowest in northeast Ohio. Thisi is the Boosters' largest fundraising event of the year.