Rangers Advance in OHSAA Tournament; St. Edward Rematch is Next 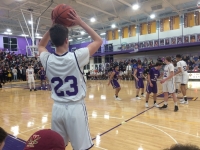 The LHS boys basketball team defeated North Royalton 57-49 Saturday night in second round OHSAA Tournament action. The victory sends the Rangers to the District semifinals, where they will face St. Edward on Wednesday night at Strongsville High School. The Eagles defeated Rhodes 88-57 at home on Saturday to earn their spot in the game.

Lakewood, the #4 seed in the distict, faced a tough challenge from the fifth-seeded Bears. The Rangers jumped out to a quick 7-0 lead midway through the first period, and seemed to have the game in hand. They dominated the game in the paint, with senior Jacob Sala and junior Tim Smith providing the early points. Lakewood also used stubborn defense and quick hands to disrupt North Royalton in the opening minutes. However, the Bears adjusted. They went on a 12-4 run in the next three minutes to take a 12-11 lead over the Rangers. Freshman Omar Abuhamdeh sparked the rally, scoring seven of the Bears points. North Royalton held a 14-13 lead at the end of the first quarter, and the partisan Ranger crowd realized this game would not be easy.

Smith opened the second quarter with a three point basket for the Rangers, the first for Lakewood in the game. The teams went back and forth for the first six minutes of the second quarter; the Rangers continued to score inside, and also used their height to block numerous shots. The Bears did their damage from the perimeter, fearlessly shooting three pointers. Lakewood finished the half on a 6-0 run in the final two minutes, and carried a 26-21 lead to the halftime locker room.

The Rangers dominated the third quarter, using their depth and defense to disrupt North Royalton's shooting. Lakewood outscored the Bears 18-5 in the third quarter behind an 11 point scoring barrage from  Smith. He made a trio of three point plays in the final 2:22 of the third quarter. The third of those was a desperation heave at the buzzer, which delighted the home crowd when it sailed through. The Rangers led 44-26 after three quarters, and appeared to have the game in hand.

Jacob Sala scored a layup 34 seconds into the fourth quarter, making the score 46-26 and seemingly ending any hope for North Royalton. However, the Bears would make four three point baskets in a two minute span to cut the lead to 48-38 with 5:04 remaining in regulation. Jacob Sala then scored a bucket 30 seconds later to put the lead at 12; but then the Bears scored a pair of baskets to make it 50-42 with 3:01 left. Smith scored a pair of baskets in the next 90 seconds to give the Rangers a 54-42 lead with 1:22 left. The Bears refused to surrender, cutting the lead back to 8 with 56 seconds remaining. A late three pointer by junior Jack Bunsey cut the lead to 55-49, but with only 21 seconds left. The Rangers scored on their final possession, as junior Tommy Sala made a dunk with ten seconds left to finally extinguish North Royalton's hopes. The crowd erupted in a mix of joy and relief as Lakewood closed it out 57-49.

Smith led the Rangers with 19 points in the game; Jacob Sala had 17; juniors Zion Kolodynski-Darby and Tommy Sala each scored 6 points. Lakewood's big men dominated the rebounding and block shot categories throughout the evening. Bunsey and Abuhamdeh led the Bears with 12 and 11 points, respectively. Lakewood (22-2 on the season) advances to play St. Edward (20-3 on the season) in the district semifinal on Wednesday. Tipoff is scheduled for 7pm at Strongsville High School. The game will be a rematch of the season's opening game, which St. Edward won 51-38 on December 1. That was the very first varsity game held at the new LHS gym.