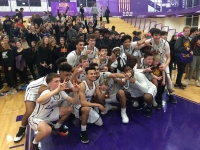 The LHS boys basketball team defeated North Ridgeville 71-52 on Friday night to wrap up a share of the Southwestern Conference championship. The Rangers and Olmsted Falls each finished 17-1 in the league, splitting their two head-to-head games. The conference championship is the first for the Rangers since 2014, when they won the now-defunct West Shore Conference under head coach Phil Argento. This is also just the second conference for the LHS Athletic Department since joining the SWC in the fall of 2015. The previous championship was boys cross country in fall 2016.

The evening had an air of anticipation. The student section dressed in all black for the occasion, and the crowd was the largest at LHS since opening night on December 1st.  Senior Night ceremonies before the game spotlighted the achievements of this year’s seniors. Once the opening tip happened, things were a bit rough for the “purple Rangers”, who faced a stiff challenge from their North Ridgeville namesakes.  Lakewood took a 13-6 lead with 1:36  remaining in the first period, and seemed ready to pull away. However, North Ridgeville battled back to cut the lead to 16-14 at the first period break.

The lead changed many times in the second quarter, with neither team gaining more than a two-point advantage. Seniors Raekwon Whitfield and Liam Doup each hit key three pointers in the final three minutes of the half to help Lakewood take a 29-27 lead to the locker room.

Lakewood took over the game in the third quarter, using its depth to wear down the visiting Rangers. Lakewood applied full court pressure early in the third period, disrupting North Ridgeville and helping to build a 43-30 lead in less than four minutes. North Ridgeville regained its composure, but was unable to climb out of the hole. They managed to cut the lead to 51-43 at with less than a minute left in the third period, but that was as close as they would get.

Lakewood went on an 11-2 run early in the fourth quarter to build a 62-45 lead with just over four minutes to go. That run put the game out of reach, and the sense of excitement built among the home fans. The seniors exited the game to a tremendous ovation, leaving reserve players to finish up the final minute. When the final second came off the clock, happy Ranger players stormed the floor. The student section also ran out to congratulate the team in a frenzy of joy and excitement.

“These guys did it all” head coach Alex Cammock said of his team after the game, deflecting credit to his team and assistant coaches. “What a fantastic thing” he said while watching his team and the students celebrate. He was especially thrilled that the championship came in the new gym. He’s already planning ahead to Wednesday’s tournament matchup with Max Hayes, which will take place at 7pm at the LHS gym. “They get up and down the court” he said of the Hayes squad, “we’ll have to rebound”.