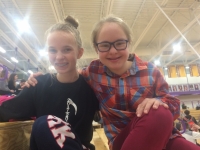 Ranger fans were all smiles during the 57-32 win.

The Lakewood boys hoops team defeated Westlake 57-32 on Tuesday night at LHS, retaining their spot in first place of the Southwestern Conference with only two conference games remaining. The Rangers swept the season series from the Demons, and boosted their overall record to 17-2 on the season.

Lakewood jumped out to an early lead, going up 6-0 within the first three minutes of the game. Westlake eventually got its offense going, and the Rangers led 11-9 after the first period.  Senior Jacob Sala was the key factor in the first quarter, scoring eight points. Lakewood rebuilt the lead in the second quarter, taking a 25-16 lead into the locker room. The period featured a 9-2 Ranger run that included a three pointer by senior Noah Stadler.

Westlake hung around in the third quarter, reducing the lead to as little as five points. However, the Rangers were able to keep the Demons at arm’s length, and carried a 37-29 lead into the final period. Lakewood dominated the fourth quarter, wearing down the Demons and outscoring them 20-3. Junior Tommy Sala stepped up in the final period, scoring eight points to help the Rangers pull away. Jacob Sala led the Rangers with 14 points on the evening. Tommy Sala had 12 points; junior Tim Smith had 8; Stadler, junior Zion Kolodynski-Darby, and senior Andy Garcia each had six points. Junior Anthony Rego led the Demons with 13 points.

The victory raises the Rangers conference record to 15-1 with two games remaining. They remain tied with Olmsted Falls for first place in the league. The teams split their regular season series 1-1 and will not meet again in the regular season. Lakewood travels to Midview Friday night for another conference game against the Middies at 7:15pm. Their next home game will be the season-ending senior night game against North Ridgeville on Friday. Varsity tipoff is scheduled for 7:15pm.

See all of the photos at: http://lakewoodobserver.com/photoblogs/jacob-chabowski/gallery-lakewood-tops-westlake-5732