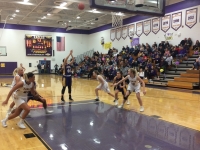 The LHS girls basketball team defeated Avon 32-30 on Saturday afternoon to complete their regular season.  The Rangers swept Avon in the season series, having defeated the Eagles at home in January in a 49-45 overtime game. This game was close throughout, and an intense defensive battle. Both teams forced numerous turnovers and forced the opposition into tough shots.

The tone was set early, as the teams battled back and forth through the first half. Avon hit a three point shot in the closing seconds of the first half to take a 17-16 halftime lead. Lakewood opened the third quarter strong, as senior center Olivia Nagy hit a mid range jumper to put the Rangers back ahead with 6:16 left in the third quarter. The Rangers used a 7-0 run to lead 23-17 midway through the period. Avon responded with a pair of baskets to make it 23-21, but then Lakewood senior Isabel Cintron hit her second three pointer of the quarter, pushing the lead back to five points. Avon senior Juliann Walker kept the Eagles in the game, scoring six of her 14 points in the final minute and a half of the third period. Her surge cut the lead to 29-28 Lakewood entering the fourth quarter.

The fourth quarter was an epic defensive battle. Avon re-took the lead 30-29 with 6:50 remaining in the game. Ranger junior Christian Massey responded thirty six seconds later, scoring on a drive to make it 31-30 Lakewood. And that’s where the score stayed for the next six minutes. Each team thwarted the other on each possession, and the clock gradually melted down to the final minute. Avon had a chance to take the lead with under 30 seconds left, but Ranger junior Claire Hylton made a huge steal to save the lead. The scoring drought finally ended with 4.3 seconds left in the game, when Nagy hit a free throw to double the lead. Avon, which was out of time outs, missed a desperation 3-point shot at the buzzer. The Rangers won 32-30.

Nagy led the Rangers with 11 points; Cintron had nine; Massey had four points, including the go-ahead basket in the fourth quarter; senior Courtney Ribar had three points. Avon’s Walker led all scorers in the game with 14 points; junior Elizabeth Flynn had ten points for the Eagles.

The win lifts the Rangers final regular season record to 12-10 overall, 10-8 in the Southwestern Conference. They begin OHSAA tournament play on Saturday night at the LHS gym. They will face Brecksville-Broadview Heights in a first round game at 7pm. The winner of that game will go on to face the winner of the Medina-Rhodes game on February 22nd.