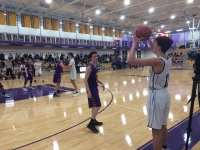 Ranger Zion Kolodynski-Darby inbounds during the team's win over Avon. He had 12 points in the game.

The end of the regular season is rapidly approaching, and there were two huge boys basketball games in Lakewood Friday night. St. Edward hosted St. Ignatius, and Lakewood hosted conference rival Avon.  Both games were important for OHSAA tournament seeding, which will take place Sunday.

St. Edward defeated St. Ignatius at the Eagle’s Nest 85-67 to sweep the season series between the two arch-rivals.  The Eagles led throughout most of the game, which was played before an enthusiastic packed house. Ignatius was stubborn, keeping pace with the Eagles through most of the first period. The game was tied at 13 with just over a minute to go in the quarter. Junior Meechie Terry and sophomore Montorie Foster then hit back-to-back three pointers for the Eagles, helping them take a 19-15 lead at the first break.

Sophomore Grant Huffman and senior PJ Flannery heated up early in the second quarter,  scoring eleven points combined in a two minute span. St. Edward built a 32-22 lead with just under five minutes remaining until halftime. The Wildcats, who fought ferociously all night, closed the second period on an 8-3 run to cut the lead to 40-37 at the half.

The game stayed tight for the opening minutes of the second half, with St. Edward holding a 45-41 lead with 5:11 remaining in the third quarter. The Eagles then went on a 7-0 run to restore a double digit lead. The run included a three point basket by senior Emmett Chambers, and on “old fashioned” three point play (basket and free throw) by Foster. St. Edward’s kept the Wildcats at arm’s length the rest of the quarter, and carried a 54-51 lead entering the fourth period.

The Wildcats continued to battle, cutting the lead to eight points early in the final period. However, the Eagles pulled away to win by the final score of 85-67. Huffman led the Eagles with 19 points; Flannery had 17 points, including five three point baskets; Foster had 15 points; Blanton had 13; Terry had 11 points. Senior Neeko Melendez led the Wildcats with 19 points.

The win likely seals St. Edward (16-3 on the season) as the top seed in the OHSAA Strongsville bracket, which will be announced on Sunday.  St. Ignatius will also likely be a high seed. The Eagles will be idle until Saturday, February 17, when they will face Cleveland Central Catholic in a 7pm tipoff.

As St. Edward was making a statement Friday on Detroit Avenue, Lakewood was making one of its own over  on Bunts Road. The Rangers hosted conference rival Avon,  and came away with a 66-56 overtime win. The victory keeps Lakewood in a first place tie in the Southwestern Conference with Olmsted Falls, and boosts the Rangers chances of a high seed in the Strongsville district of the OHSAA tournament.

Avon entered the game with a 7-7 league record, but gave Lakewood all it could handle for four quarters. The game was tied at 13-13 after the first quarter. It was still tied 29-29 at halftime. The Rangers carried a narrow 44-42 lead after three quarters. They opened up a six point margin midway through the fourth quarter, leading 54-48.  However, Avon closed the margin with a 6-0 run in the final minutes, forcing the overtime period. Avon junior Jake Parker, who had 24 points in the game, accounted for all six of the Eagles’ points during that final run.

The overtime  period was very different than regulation, as Lakewood dominated. Junior Zion Kolodynski-Darby opened the Ranger scoring with an old-fashioned three point play. Senior Jacob Sala then made a pair of baskets to stretch the lead to 61-54. Junior Tommy Sala and senior Liam Doup then scored to make the lead 66-54 with under two minutes remaining. They closed out the game with a 66-56 win, sending the large Ranger crowd home happy.

Jacob Sala finished with 14 points; Darby had 12; Tommy Sala finished with 11; senior Jybrell Boyd had a total of ten points for the Rangers. The win bolsters Lakewood’s case for a high seed in the Strongsville OHSAA tournament bracket, which will be determined Sunday afternoon.

“They came out and executed” Ranger head coach Alex Cammock said when asked about his team’s overtime dominance. “They defended great in overtime”.  “It’s a fantastic group of kids and they deserve every bit of this” Cammock said about the team’s performance so far this season.  The win raises Lakewood’s record to 16-2 overall, 14-1 in the SWC. With three SWC games remaining, they remained tied with Olmsted Falls for first place. The Rangers host conference rival Westlake Tuesday night in another important game.