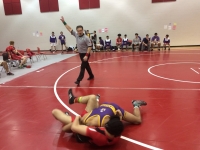 Ranger Jayden Jackson gets a pin in a match against John Marshall High School.

The winter sports season is in high gear, so here are some updates on the LHS varsity teams. Both basketball teams are on winning streaks, the hockey team is having a strong season, and the wrestlers won a rivalry match on the road.

The Rangers topped North Ridgeville on the road last Friday, lifting their season record to 8-2. Junior Tommy Sala led Lakewood with 22 points in the 62-41 victory. Senior Jacob Sala had 19 points in the game, and senior Liam Doup had 11. Lakewood is now 6-1 in Southwestern Conference play. Their next home game will be January 30 at 7:15 p.m. against Olmsted Falls. The Bulldogs are the only team to beat Lakewood in SWC play this year, taking a 41-38 decision on December 15.

Lakewood won its sixth straight game on Saturday afternoon at Lakewood Gym. The Rangers beat North Ridgeville 51-48 in overtime. The Rangers played without starters Isabel Cintron and Christian Massey, both of whom were injured in an on-court collision in the previous game. Senior Olivia Nagy had 30 points to lead the Rangers, and seniors Mary Lavelle and Courtney Ribar each scored seven. Lavelle started in place of Massey, and Ribar switched to point guard in the absence of Cintron. They return to action Wednesday, January 24th with a home game against Amherst. Junior Varsity is scheduled for 6 p.m., varsity at 7:15 p.m..

The Ranger icers are having a fine season, as they hold an 8-1 record in the Blue South division of the Greater Cleveland High School Hockey League. They dominated a pair of games last weekend, beating Brush and Mayfield. Friday night they defeated Brush 10-0 at the Cleveland Heights ice rink. Then on Saturday they returned home to Serpentini Arena to beat Mayfield 6-0. Sophomore twins Rob and Will Holden continue to make a big impact on the program. Rob has served as the team's goalie, while Will is a leading goal scorer. Mac McFarlin is another major scoring threat, while Patrick Gilman and Jonas Hupcey lead the defensemen. The Rangers host their final home game of the season on Saturday night, when they face Brooklyn at 7 p.m. at Winterhurst Arena. It will be senior night, where this year's graduating players will be recognized at a pregame ceremony.

The Rangers traveled to John Marshall last Friday, where they defeated the Lawyers 60-24 in a dual matchup. Marshall is the defending Senate League champion, and is a contender for the title again this year. Lakewood won nine matches by pin. Among the Ranger winners was Jayden Jackson, who won his match in the 152 pound weight class. The team will host Normandy and John Adams on February 8 at the LHS gym. Action will begin at 6pm.

The team competed at the "Rock and Roll Classic" on January 13th at Brecksville-Broadview Heights High School. Senior Caitlin Cimino won the all-around title, and the Rangers finished second as a team. The team will host its final home meet on January 30th at 6:30 p.m. at Horace Mann Elementary. They will welcome Twinsburg, Magnificat, Rocky River, Holy Name, Avon Lake and Eastlake North. It will be Senior Night, where this year's seniors will be recognized for their contributions to the program.