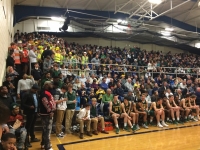 The St. Edward student section (upper left) among the standing-room only crowd at Sullivan Gymnasium.

The St. Edward basketball team defeated St. Ignatius 74-62 Saturday night before a packed house at Sullivan Gymnasium on the St. Ignatius campus. The victory avenged the Wildcats’ sweep of both regular season games between the two rivals, and breaks a two-year losing streak for the Eagles at Sullivan Gym. Sophomore Montorie Foster led the Eagles with 20 points, and fellow sophomore Grant Huffman had 18. Senior Neeko Melendez led all scorers in the game with 24 points for the Wildcats.

Not surprisingly, the game featured lots of intense action. Both schools had raucous student sections, and the players fed off the energy early. Players from both sides fought ferociously for loose balls, with bodies hitting the floor on multiple occasions.  The Wildcats kept the score close early, as St. Edward led 18-15 after the first quarter despite 8 points from Melendez. Eage senior PJ Flannery had 8 of his 11 points in the first quarter, including a pair of back-to-back three pointers  late in the period. Foster had six points in the first period, including four free throws.

St. Edward began to pull away in the second period, as junior Meechie Terry scored seven points to help build a 41-27 lead at intermission. Terry, who missed the first half of the season due to injury, appears fully recovered and will be a key to the team’s tournament chances. Foster added five more points in the second quarter, and sophomore Devontae Blanton hit a three pointer.

The Eagles took command of the game during the third quarter, opening the period with a 13-3 run. The Eagles’ depth wore down the Wildcats, as their aggressive defense forced turnovers that led to transition baskets. Huffman, who had been contained in the first half, joined the scoring parade  with seven points in the period. St. Edward led 59-39 going into the fourth quarter, and stretched the lead to 69-43 with less than five minutes remaining. Both teams used reserve players for the final minutes, and the Wildcats cut the final margin to 74-62.

St. Edward (13-2 on the season) will be idle until Saturday, January 27, when they travel to Collinwood to face Villa-Angela St. Joseph at Viking Village. The Vikings won the Division III state championship last March. The Eagles’  next home game will be Friday, February 2nd against  Lutheran East. The Falcons won the Division IV state championship last March in Columbus.