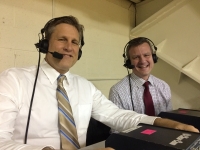 St. Edward defeated Akron St. Vincent-St. Mary 62-55 Friday night at the Eagles’ Nest. The matchup of state powers was televised across the region on Spectrum. The Irish, defending Division II state champions, led the game for most of the evening, but the Eagles rallied in the fourth quarter. Eagle sophomore Grant Huffman, who was hurt during the opening night game at Lakewood, had 12 points and was a key to the comeback.

St. V got off to a strong start, opening a 13-5 lead midway through the first quarter. Senior Scott Walter and freshman Malaki Branham combined for nine of those 13 Irish points. Unphased by the large crowd in attendance, each made a three pointer during the early run. The Eagles chipped away at the lead, cutting the margin to 16-13 at the end of the first period.

Walter and Branham each scored again early in the second, stretching the Irish lead to 20-14 with 5:40  left in the first half. Eagle senior Elliott Tirbaso nailed a three pointer to cut the lead in half, and the Eagles switched to full court pressure defense to disrupt the Irish. The strategy worked, as St. Edward closed the first half on a 9-4 run to take a 26-24 halftime lead. Sophomore Montorie Foster made four consecutive free throws late in the half to help put the Eagles ahead.

St. V bounced back in the third quarter, going on a 12-4 run to take a six point lead midway through the third period. St. Edward battled back, using its deep bench to briefly retake the lead. Huffman, who had only practiced twice since having the boot removed from his broken ankle, made a key three point play late in the third to briefly give the Eagles a 42-39 lead.

The game was tied entering the fourth quarter, but St. V quickly jumped in front. Branham and fellow freshman Seth Wilson each scored to make it 46-42 Irish with under seven minutes left in the game. St. Edward then clamped down defensively, going on a 14-2 run to take control. Huffman scored five points during that stretch, including three free throws. The Irish cut the lead to 56-52 with less than three minutes to go, but would get no closer. The final score was 62-55.

Foster led the Eagles with 13 points in the game. Huffman had 12 points off the bench in his return game. Senior Emmett Chambers scored 9; sophomore Devontae Blanton had 7; Junior Demetrius Terry, who like Huffman is coming off an injury, scored 7 points and brought tremendous energy to the game. Junior Chris Painter led the Irish with 12 points; Branham and Walter each scored 11.

St. Edward, now 9-2 on the season, are in the midst of a busy weekend. Three games in less than 72 hours will test the team’s depth. Tonight they face Benedictine in a 7pm home game. Sunday they will face Shaker Heights at 3:30pm in a neutral site game at Baldwin-Wallace.