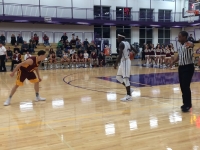 The Lakewood boys basketball team held off a fourth-quarter rally to defeat Avon Lake 64-52 on Tuesday night at the new LHS gym.  The Shoremen shrunk a 20 point lead to nine, but Lakewood held on to get the win. Senior Jacob Sala led the Rangers with 25 points, and senior Liam Diop had 14. The Rangers are now 4-2 on the season, 3-1 in Southwestern Conference play.

Lakewood took a big lead in the first quarter, going up 17-5 in the first five minutes of the game. Avon Lake stayed in the game with good three point shooting. Sophomore Creed Bologna hit a three at the first quarter buzzer to make the score 23-14, getting Avon Lake within single digits.  The two sides played evenly in the second quarter, as Lakewood kept a nine point lead at the half (34-25).

Junior Tommy Sala opened the third quarter with a pair of baskets for the Rangers, putting them ahead 38-25. Lakewood went on a 10-3 run late to open up a 52-34 lead at the end of the third quarter. Diop added another basket early in the fourth, putting the Rangers ahead 54-34 with 6:48 remaining in the game. Lakewood’s seemingly comfortable lead then quickly shrank when Avon Lake went to full court pressure.  The Rangers were out of sync, turning the ball over with some bad passes and a pair of five-second violations. Avon Lake outscored Lakewood 12-2 during a two-minute span, making the score 57-48 with 3:21 left in the game. Senior Noah Stadler had a pair of crucial free throws down the stretch that helped Lakewood hold on for the win.

Lakewood will be idle until Friday December 29, when it travels down Bunts/West 140th for a nonconference road game at John Marshall. The Lawyers are 6-1 on the season, with their only loss coming last Saturday to St. Edward. Varsity tipoff for that game is at 7pm. The Rangers next home game will be Friday, January 5 against North Olmsted.