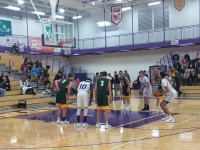 The Rangers used a dominant second quarter to blow out Amherst 77-35.

The Lakewood boys basketball team defeated Amherst Steele 77-35 Friday night at the new LHS gym. The victory lifts the Rangers record to 2-1 overall on the season, and 1-0 in Southwestern Conference play. The game was competitive in the early stages, as Lakewood led only 17-12 at the end of the first quarter. Lakewood pulled away in the second period, outscoring the Comets 25-5 to take a commanding 42-17 halftime lead. The game was never in doubt during the second half, as Amherst never got closer than 22 points.

Junior Zion Kolodynski-Darby led the Lakewood scoring effort with 15 points, 13 of them in the first half. Junior Raekwon Whitfield also had a very strong first half, scoring 11 of his 13 points before the break. Twelve different players scored during the game, as the bench was able to get significant playing time in the fourth quarter.

Lakewood returns to action on Tuesday night with another home conference matchup, this time against Berea-Midpark.  Junior varsity action is scheduled to begin at 6pm, followed by the varsity game at 7:15.