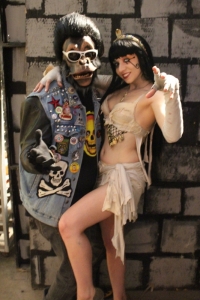 Janet Decay (The Mummy) and Grimm Gorri (The Monkey)

Creepy Cleveland natives Janet and James, AKA Janet Decay and Grimm Gorri have opened a curiosity/resale shop on 13349 Madison Avenue called The Mummy And The Monkey's Thrift Crypt. It is named after the couple's successful webshow, The Mummy and The Monkey, in order to continue a local tradition that spans over fifty years! Influenced by Cleveland TV greats like: Ghoulardi, Superhost, Big Chuck & Lil' John, as well as nationally syndicated shows such as: Elvira, and Mystery Science Theatre 3000, they strive to deliver wacky comedy bits and screen cheesy B-movies.

This Die-namic duo has haunted the scene at horror conventions as celebrity guests and performers. The Thrift Crypt shop reflects their love of strange and unusual gift items, from unique art, to retro toys, and everything in between. Walking up to their front window you can see, on a mid-century television, Cleveland nostalgia videos such as Big Chuck and Lil' John, or Ghoulardi. Many have commented on their eye-popping window displays.

More info can be found on http://www.TheMummyAndTheMonkey.com

Usually open Wednesday through Saturday, call or message to verify.