Recipes: A Tale Of Two Carrots 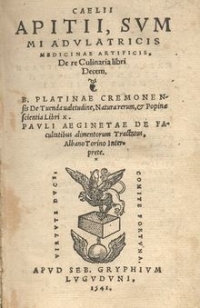 She measured out the butter with a very solemn air,
The milk and sugar also; she took the greatest care
To count the eggs correctly and to add a little bit
Of baking power which, you know, beginners oft omit,

Then she stirred it all together and she baked it full an hour,
But she never quite forgave herself for leaving out the flour.

We're coming up on holiday time and for me that means Thanksgiving dinner, Christmas cookies, the works. It's a perfect time for kids and parents to be in the kitchen together, not only making food for each other, but also to give away as gifts to friends and loved ones. With the prospect of spending extra time with kiddos in the kitchen in the next couple of months, it's a good time to revisit some of what helps keep cooking and baking lower-stress.

One of the things that adults who have been cooking for a while can forget is how frustrating recipe instructions can be sometimes. Just how big is a large onion compared to a small onion? Or carrot, or potato? What does "season to taste" mean and how do I know? When a recipe calls for a half a cup of chopped parsley does that mean I stuff a half cup full of sprigs and chop them, or do I chop as many sprigs as I need to until I have a half cup?

Recipes and cookbooks have been around for a very long time. One of the older ones that we know about comes from the fourth or fifth century and is a book of Roman cooking called "On the Subject of Cooking" also commonly referred to as "Apicius." Here's one of the simpler recipes:

And pumpkin pie is made thus. Stewed and mashed pumpkin is placed in the pan, seasoned with a little cumin essence. Add a little oil; heat and serve.

So, the ancient Romans made pumpkin pie, that's pretty cool. But where are the measurements? How long do you cook it? What the heck is cumin essence?

By Early American times things had gotten better. Here's a cake recipe from The White House Cookbook, which is a collection of recipes that first came out in around 1887.

We at least have some ingredients with this one, although all I can tell you about a "quick oven" is that it means that it was relatively hot and so things cooked in it would be done quickly.

The fact is that most recipes were more reminders of ingredients for dishes that cooks already knew how to make. Learning how to cook used to be an incredibly important part of a girl's education and they started learning early. They would begin with simple biscuits and boiled vegetables and make their way up to cakes and bread and more complex dishes. Boys would have spent little or no time being taught how to cook, but even a lot of bachelors would be able to make their daily bread. Another interesting thing to know is that standard measures didn't always exist, so your "cup" could be a different size than your neighbor's.

The first cookbook that really starts to look like the recipes we use today was "The Boston Cooking School Cookbook" by Fannie Farmer. Ingredients are listed first, the instructions are in order, and the measurements are exact. Fannie Farmer is also credited with inventing the measuring cup; a cup with markings on it to indicate different amounts.

So where are we today and how do we figure out those things that still seems a little unclear? In general, here's what you can expect from a well-written modern recipe:

Some other tips for reading and using recipes:

And now we go all the way back to the beginning. How large is large? Fortunately, as recipe writing has evolved, professional cooks have landed on some good standards for otherwise vague terms.

For onions, potatoes, carrots and other root vegetables here is a good guideline:

Now what in the world is "a dash" or "a pinch"? Well, when you see these it's really just another way of saying "season to taste." When you add a pinch or a dash of salt or any other seasoning, what you're doing is adding a very little amount (and pinching some between your fingers is perfectly fine) then tasting the food and deciding if you want to add a little bit more, then repeating that until you are happy with the taste. You'll never see baking recipes call for pinches or dashes of anything because you can't taste the recipe until it's baked and then it's too late to adjust. You'll only use pinches and dashes at the end of a cooked dish. One exception might be when you are doing something like sprinkling cookie dough with sugar. That will usually be called sprinkling, and it's fine to just eyeball it.

What about everything else? How much juice is the juice of one lemon? How many zucchini do I need to buy to end up with a grated cup? There are too many possibilities to answer here, but there are some websites that you can visit to look up most of the ingredients that you will have questions about:

Michael Crowdes is a Lakewood resident, former restaurant owner, who loves to cook and loves teaching kids. His favorite students are his two godkids; one of whom is incredibly fussy and mostly likes mac and cheese, and the other who was eating blue cheese stuffed olives and brie almost as soon as she could chew. There are more articles and recipes at sproutsculinary.com

Lakewood resident since 2005, member of the Lakewood Historical Society Board of Trustees, avid cook and ecommerce professional.