Vote Against Issue 64: The Loss Of Our Hospital & Our Most Charitable Foundation 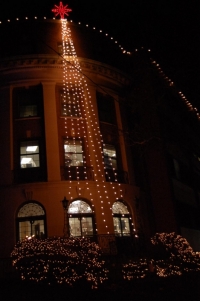 Lakewood Hospital, Over A Century of Touching Lives and Partnership in Education

Friends ask me why I am still involved in Save Lakewood Hospital. As a mother of two teenage boys, I am involved because I know the importance of healthcare. Not only am I concerned about the well-being of my children, I am also concerned about the well-being of my community. Lakewood Hospital touched countless lives. There was great care and love to millions for over a century. How many babies do you know who were born in our hospital? How many lives were touched by the Grace Unit? Our hospital was an icon of hope for all that is good in medicine and all that is good for a community. A sign still hanging in one of the middle schools states “Lakewood Hospital, Over A Century of Touching Lives and Partnership in Education.”  The impact of this loss is catastrophic, to both our economy and our social welfare. It didn’t have to happen. The closing of the hospital was built upon fabrication, greed and guile.

Passively accepting this injustice that hurts so many and profits so few is not right. 3400 signatures were obtained in early January to place a referendum on the ballot. Referendums provide the electorate the right to vote on issues referred to them by direct decision, such as our hospital closing. Lakewood city government had not just the opportunity, but also the legal and moral obligation to place this referendum on the March ballot or to hold a special election.  Instead, it was pushed off until this November. However, all operations to dismantle the hospital went into effect immediately, beginning with the removal of tens of millions of dollars worth of hospital beds and licenses. This has serious economic and moral consequences. This is not good government. The blatant destruction is incomprehensible.

The consequent loss of the Lakewood Hospital Foundation (LHF), a charity of over $33M dollars, is one of the gravest areas of impact. Charity has always been a part of our hospital. Gifts to LHF were used for the sole benefit of Lakewood Hospital, helping individuals and families in OUR community. Where is the outcry? LHF provided $7M in charitable contributions annually to our underserved. We must preserve this good and repudiate the driving “non-profit greed” that permeates this issue. LHF has been "repurposed" to support development and health initiatives in places like Avon, Twinsburg, Brunswick and Mentor.

The hospital loss hurts our entire community, sending residents to out-of-town hospitals when they suffer serious problems such as heart attack or stroke. City Hall says, “Fairview is just a few miles away” but ignores the fact that the density of our population has now left Fairview woefully overburdened and over crowded.  Carefully read the terms of the new master agreement. There are absolutely no guarantees that our ER will remain in operation.  Do not accept this as great for our city. Nothing, absolutely nothing, compares to an ER attached to a fully functioning acute care in-patient hospital.

This issue it is NOT OVER. The information that has come to light as a result of the discovery process in a pending lawsuit and through public records requests is astounding. Our hospital was viable. It was strategically decanted under the very parties duly sworn to protect and preserve it. It was the greatest economic engine in our city, generating a $280 million dollar annual impact to our economy. Other parties were indeed interested in running it. Come November, let your voice be heard. Do your due diligence to remove the restrictive covenant that limits healthcare in Lakewood and demand a genuine “RFP” process for the best possible deal with your vote AGAINST ISSUE 64.

Tara Peppard currently resides in Lakewood, Ohio with her twin sons who are actively a part of the Lakewood City School’s music and athletic programs. She is Laboratory Manager & Lecturer for the Physics Department of CSU. Her hobbies include environmental outreach, swimming and ballet. She is a member of AAPT, APS and NRDC. Her favorite part of Lakewood is the Sweet Spot and being able to bike everywhere.