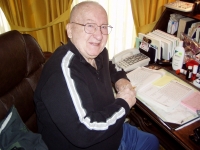 Robert Rice at his desk. (Photo by Gary Rice)

Yeah, I know, it's nowhere near Halloween.

Still, this column is about ghosts.

Some of you might even be thinking that this column was written by a ghost.

How are you all doing? Yeah, I'm still around. I'm the same Gary Rice who wrote hundreds of columns and articles for the Lakewood Observer and other publications over the last ten years. We've covered just about every subject under the sun, have we not? (And likely a few that, in one way or another, related to the moon, as well.) Yeah, I'm the same Gary Rice....except of course...I'm not.

Times change. So do people, and so have I. The last ten years of my life were spent caring for my dear late father; Lakewood Schools Staff Hall of Fame member and music teacher, Robert Rice. They were good years too. For the most part, in fact, they were great ones for both of us. Dad's smile and positive attitude shown brightly...up to, and including on the day of his passing. Dad certainly showed me how to live, and he showed all of us how to bravely face that last chapter in our lives. As Dad aged however, and the trials of his life increased exponentially, maintaining that brave smile and encouragement for me and others became more challenging for him with each passing hour. "But Gary," he would say, "always remember to smile every single day of your life, because it might be the only smile that someone will see on that day." Honestly, he even kept that smile in his coffin.

As for me? Oh sure, I could smile with the best of them. The thing is, I just so often took life too dang seriously. Whether with teaching special needs children, fighting for the rights of the disabled, working with bands, fixing guitars, writing columns, shooting photography, you-name-it, I just took everything so seriously that there were times that I did indeed forget to have fun. My smile was therefore all too often, a forced one. No, it was not like Dad's, but (and I would hope that he knows this by now) I've been really working on that genuine smile nowadays. :-)

Oh yeah, back to those shape-shifting ghosts. (Isn't "shape-shifting" the current buzz phrase these days for objects that are para-normal and change from one form into another?) Some of us older folks laugh that sort of thing off, don't we? The only thing is, when you really think about it, it's really not a "para-normal" concept at all. Actually, some very normal things in our lives can't be destroyed, but they can indeed "shape-shift." Take water, for example: If I gave you a classroom assignment to destroy the water in a glass, you could not do it. You could drink it, pour it on the ground, evaporate it, freeze it, etc...but all you would be doing would be shape-shifting it into a different form. The same is true of energy. Ask any scientist. You can't destroy it, only transform it (shape-shift it?) from one form into another.

Could that therefore also be true of the human soul? I think so. There is, after all, a profound difference between a living and a deceased body, and that is indeed the spark of life-- that sublime energy life force, that many do call the soul. When it leaves the body, does that soul in fact, (since it is indeed life energy in its purest form) transform? That is, shape-shift?

Where indeed, does life's energy go when it leaves a body? It has to go somewhere and if so, does it become a spirit? Churches often caution us against communicating with such spirits, (although they generally make exception for the Holy Spirit, or other spirits who are already in Heaven.) Are there therefore, spirits still on the earth, that for one reason or another, have not yet taken the journey to Heaven? Are some of them walking with us? Could they be either trying to help or harm us? Interesting speculation indeed.

Orbs are also a fascinating topic. As a photographer, I've often seen them pop up as unwanted circular blobs in a photo. Some feel that those orbs represent ghostly spirits that show up in photos. What I can tell you is simply that when orbs have appeared in my pictures, they came at times when ghostly apparitions would have certainly been appropriate, such as a funeral, a wedding, or some other spiritually memorable setting.

There's another kind of ghost however, and those are the ones that all of us can probably identify with. They're the "ghosts" that pop up unexpectedly, whether in our memories or in our dreams. So many times at home, I'll "see" Dad on the couch, or in his chair, or sadly yes, on the floor where he died. More often, I'll see him in so many dreams in the night. Many MANY times, I'll "hear" his words when I'm about to make a decision. The same would be true about Mom. She's been gone over a decade now but she's really not. I just saw her last night in a dream, as a matter of fact. That dream was absolutely as real as they come.

We "see" more than our deceased parents from time to time, do we not? As I'm now in my 60's, I've had many friends and acquaintances who have passed away; only they really haven't, have they? I'll come across something that triggers a memory, and those people come back to me very quickly, as I suspect, so do your deceased friends appear to you once in awhile. We're not talking about ghostly apparitions here either. I think you know what I mean.

Walking around Lakewood, I remember the people who once lived in this house, or that one. I remember my friend just up the street, who died over in Viet Nam. I also remember the guys who ran their business off their tricycles. There was the knife-sharpening man, the fruit-vendor, and once in awhile, there was a guy who peddled ice cream, before the trucks came and eventually went away. I remember the milk chute and the milk man too. I also remember the neighbors. For a couple of them, WWII did not go away, and neither did their alcohol. For others, they turned their little postage-stamp side street Lakewood yards into veritable Gardens of Eden.

The elderly sister ladies we originally rented from on Rosewood still had their WWII Victory garden, and there was a never-ending supply of tomatoes, green beans, onions, and of course, beautiful seasonal flowers.

Can an eight-inch tomato be a ghost? Can a Snapdragon flower? I still see those so very clearly, even after all these years.

Even now, out of the corner of my eye, I sometimes catch a shadow, a glimpse, a memory...or was it just the residue of a salty old tear, from a salty old guy?

Time indeed goes on, but for now at least, those old Lakewood ghosts and memories are never very far away for me. Many of them, perhaps even most of them...(and especially Dad) taught me about the smile that you will be hopefully seeing me with... from now on.