"Back To The Banjo!" 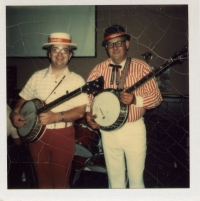 Gary, with James Keener at Shakey's Pizza, sometime during the '70's.

Lakewoodites who read the Lakewood Observer's online "Observation Deck" community chat room are well aware that the expression, "Back to the banjo..." is usually how I conclude my periodic postings. After working hard as a young man to be the best drummer around, and going from there to the world of the guitar as an older teen and young adult, (and from those modest beginnings to later becoming known as "Guitar Guy Gary", guitar tech to the Rock and Roll Hall of Fame) just how indeed DID Gary get involved with that banjo anyway?

Well, it's a long story.

Fact is, although my parents harkened from the southern (Mom) and northern ends (Dad) of the Appalachians, neither of them thought too much about the ancient mountain music that they grew up with. Truth be told, Dad and Mom met during WWII, married, and went on to write very modern, up-to-date songs. Dad (Robert Rice) is also a retired Lakewood music teacher who was known for his pioneer work with electronic music education. He created an illuminated keyboard and a musical sliderule for classroom use, and also experimented with electronic violins, trumpets, and synthesizers.

When I came along, I went into rock and roll, like many kids my age. Generally speaking, that style of music was easier to play than the complex polyrhythms and chordal changes I'd been accustomed to with my father's modern jazz. With the musical knowledge that I already posessed, learning simple rock songs was a snap. Let's face it, rock was just fun to perform. It was also the music of my generation, and I excelled with it. In 1970, my band SKIE and another fine band, HAZE, even tied for first place in a battle of the bands here in Lakewood. The excesses of the rock lifestyle were not appealing to me, however, so I went off to college and left the world of rock behind.. Many people whom I've met have been surprised to learn that, although I've been very involved with the world of rock guitar repair, I've otherwise had relatively little to do with rock music.

Money entered into my decision, as well. Virtually all college kids need money, and I discovered that all-occasion bands worked every weekend, plus they did not need to spend all their money on huge amplifiers and weird clothes. Generally speaking, in the rock world, in order to get the good money, much travel was required, contracts had to be signed, and one's expenses started to go through the roof. You did not need to rent a semi, for example, in order to transport a wedding band.

Still, let's be frank here. It was really all about the food. In my humble opinion, you simply ate better in a wedding band than you did in a rock band. Free roast beef, chicken, and mashed potatoes are not normally foods that you got when you walked off a rock stage...and speaking of foods, there was a GREAT pizza place (Shakey's) in Alabama, where I met an educator named Mr. James Keener, who also played the banjo.

Around that same time, I'd come across an old used banjo, having a home-made neck. Visiting my grandparents in Gadsden, we went out for pizza one evening, and there was Mr. Keener in a string tie, striped shirt, and derby hat; playing for a really appreciative crowd. The thing that impressed me, (beyond his obvious talents, of course) was the crowd's reaction to him. If there's one thing that musicians appreciate, it's being appreciated onstage. I discovered right then and there that the banjo was, and is, a real crowd pleaser. Before long, thanks to Mr. Keener's graciousness and his tips of the banjo player's trade, Dad and I were both sharing the stage with him. (Plus, need I add here? The food was good too!)

Mr. Keener indeed helped me to start out on the banjo road, and I pay tribute to him here, and to anyone else who gives of their time to help young people with music. (Still a legendary Alabama musician, Mr. Keener continues to entertain regularly, along with his lovely wife, Ruby) The joy of music always expands outward and affects others too, especially with a happy-sounding instrument like the banjo. Later in life, I would also meet the legendary banjo player, Pete Seeger, and learn still more about the wonders of banjo playing from Pete's perspective. As I started to play more and more old-time music, it occurred to me that much of my rock and roll came from those same blues and country roots that harkened out of the Appalachians. All of this was, in fact, coming around full circle for me. My parents were amazed that I started to embrace so much of the music that my family had left behind in those hills and hollers. Even Dad picked up his fiddle again, and off we went. In our years as retired school teachers, we still play old-time fiddle and banjo for various charitible events around town, whenever we are able to do so. Helping people to be happy and forget their cares for a little while are very important objectives for Dad and me, and music can be a great way to achieve those goals.

So many people spend their entire lives trying to figure out how to be accepted by others. The main thing that I've learned about acceptance would simply be this: If you help someone to have a better day, you'll find all the acceptance in life you'd ever want, and a banjo can certainly help you to accomplish that goal. Thanks Mr. Keener, for that wonderful insight.

*A founder of the original Shakey's Pizza chain, the late Sherwood "Shakey" Johnson, is a member of the American Banjo Hall of Fame (formerly the National 4-String Banjo Hall of Fame) due to his promotion of banjo music at those restaurants.