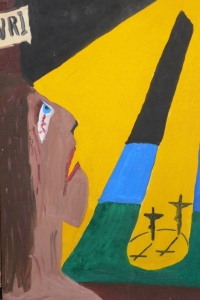 I once again had the opportunity to witness an Easter "Passion Play" a few weeks ago. Like so many times before, I stunned some of my friends by refusing to go and see it. I have consistently refused to witness yet another replay of that dark, morbid, tragic, and yet timelessly hopeful story of the Easter message.

If you were thinking that Christmas was the most important time in the Christian year, think again. For Christians, the message of Easter was what totally defined the birth of Christianity. Indeed, for many years, the celebration of Christ's (birth) Mass did not receive the celebratory acclaim that it does today. Easter, on the other hand, was when, according to Scripture, the Son of Man defeated death on the cross, and the Christian message of salvation through a belief in Christ started to spread around the world.

Easter, at once a dark and brooding, and yet- infinitely hopeful story, tells the tale of the betrayal of Jesus in Jerusalem (by one of his disciples) into the hands of the high priests. Jesus was then delivered to the Roman Prefect of Judea, Pontius Pilate, who questioned Him and ultimately brought Him before a crowd, along with another man, and offered to pardon one of them. The crowd chose to save the other guy, and Jesus was then crucified along with two others on the hill called Golgotha on the afternoon of what today is called Good Friday. On Sunday, His tomb was found to be empty, and a living Jesus reportedly appeared to His followers before ascending to Heaven; leaving them with messages of hope and salvation.

That's the well-known (to Christians) Easter story in a nutshell, and down through the ages, the story has been told and re-told by the churches in their annual Easter messages. At the same time, the story has oftentimes been re-told through community springtime thespian events, sometimes called "Passion Plays".

If you think that a play commemorating the Easter message would be warmly received by all, you would be mistaken. Although the play was, and is still, performed in communities around the world, there were those who dreaded when that play would come to town, due to one particular scene that was often depicted in those plays. That was the part where the crowd, standing before Pilate and Jesus, condemns the Son of Man and cries an oath that the blood of Jesus be on them and their children. As the crowd was presumably comprised largely of Jews, a great deal of historic animosity occurred toward Jewish people over the years as a result of those words.

After the Passion Play was performed, all too often in those European towns and villages, Jewish residents were reportedly subjected to persecutions, humiliations, retributions, and even death at the hands of angry Christian mobs. Indeed there are numerous examples of discriminatory laws that were passed against Jews by Christian-led governments over the course of history.

The particular Bible verse, Matthew 27:25, quoting that crowd's alleged unfortunate oath, is widely considered by today's mainstream Christian theologians to have been taken out of context; and was therefore intended to refer only to the specific people who were involved with the death of Christ at that time. That verse however, was unfortunately taken by some Christians to mean all Jewish people. Indeed it probably would not be an exaggeration to state that a great part of Christian persecutions against Jewish people quite possibly grew out of that one single verse, (a verse that, by the way, was not even repeated in the other three Gospels!) The really sad thing about all of this is that, all too often over the years, so many Christian people have focused on that one part of the Easter story, while forgetting the principle message that Jesus uttered from the cross, according to Luke:

"Father, forgive them, for they know not what they do."

That statement, at least to my way of thinking, totally eclipses whatever other unfortunate words or deeds might have been said or done by anyone, at any time...ever. The slate of the past having been erased, a wonderful pathway is now open for the rest of our world to follow, whether or not we might consider ourselves to be followers of Christ.

Forgiveness indeed. Now THAT'S yet another great Easter message, and one that, all too often, we seem to have forgotten to practice in today's world.