Your Oak Tree Needs Your Help 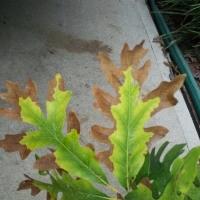 For those of you with oak trees on your property, be on the lookout for Oak Wilt, a pathogen (fungus) that attacks oak trees. It looks to be on the move here in Northeast Ohio. I diagnosed and treated a number of oaks last year. Oak Wilt is caused by Ceratocystis fagacearum, a fungus lethal to Oaks (Quercus sp.). The disease is most serious to members of the Red Oak family, including red oak, scarlet oak, black oak, and pin oak. Members of the White Oak family, including white oak, swamp white oak, and burr oak, are generally not as susceptible, they just die slower. Identifying the difference between the two families is fairly simple. Leaves with pointed 'lobes' are from the Red Oak Family, rounded lobes are from the White Oak family.

Researchers tend to believe that once oaks become infected with the Oak Wilt fungus, there is little that can be done to save the infected trees. Hence, efforts should be directed toward saving non-infected trees.

The Oak Wilt fungus can be transmitted by insects (varieties of bark and "picnic" beetles), and by root grafts between trees. Beetles are attracted to injured or cut wood. One way to slow the transmission of the fungus is to NOT prune oaks during the warm months (generally April - October). So, if you have oaks damaged by the recent storm, don't think you're doing your oak, or the tree company any favors by waiting until the weather warms up. Doing it before April Fool’s Day will reduce the risk of transmission. Oak Wilt can kill a 100 foot tall oak in a matter of months.

Oaks become high risk during the warm months when they’re ”injured” through human practices, especially pruning, and through storm damage. April, May and June are the months that pose the greatest risk but other warm season months can as well. Several species of picnic beetles are attracted to fresh wounds caused by trimming and storm damage, and their activity transmits the fungus to healthy trees.

Because of the size and value of mature oaks, constant vigilance is needed to protect against the threat of Oak Wilt. If you notice anything unusual with your oak, get help. It’s also crucial to spread the words, DO NOT PRUNE during the warm season. Storm damage should be assessed and repaired promptly. It’s also highly recommended that community efforts be established to mitigate the threat of Oak Wilt.

The most common ways the fungus is spread are injury and human activity. Not disinfecting tools after pruning an infected tree can transmit the fungus to a healthy tree. Except for emergency situations, cessation of pruning during the warm season can help. If it’s necessary to prune during warmer weather, apply a pruning paint or sealer (not spray paint or other household chemicals!) to the clean cut to help keep away sap beetles. Repair storm damage as quickly as possible during this time. Pruning and storm damage repair during the dormant (Fall/Winter) season is recommended. Pruning sealer is generally not necessary at that time.

The fungus is also spread via root grafts. Roots from adjacent trees contact each other and actually graft together. Preventative treatment is the best way to save oaks. Once you determine a tree is infected, treat any adjacent oaks to protect them. Sadly, many times the carrier oak will not be able to be saved. Trenching down 3 to 4 feet to sever grafted roots is also an option, but it’s noisy, expensive, and leaves a yard a mess.

Identifying Oak Wilt can be quite difficult, even for experts. According to Michigan State University Extension, submissions to diagnostic labs often result in negative tests for Oak Wilt. On a good day, even with expert plant diagnosticians analyzing excellent sample submissions, Oak Wilt fungus may only be confirmed about 40% of the time from actual affected trees. Contacting an Arborist with experience in disease recognition is your best bet.

Here’s what to look for. Symptoms in recently infected trees include leaf margin browning, progressing inward and from the leaf tip to the leaf base. There is a sharp delineation between living and dead tissue, with a very distinct line between the bronze and green tissues, almost like someone painted them.  Leaves on branches may appear to be wilting. Some leaves may turn green or brown and drop, while others remain attached. Discoloration in the sap may or may not be present, and branch cross sections will show spots or dark areas in the xylem. But, these symptoms can be descriptive of other problems and misdiagnosis is not uncommon. Fungal mats, called pressure pads, may develop beneath the bark by the following spring. These mats, composed primarily of mycelium (thread-like growths), form beneath the bark. Sometimes the mats raise and crack the bark, giving off a fermenting odor that attracts insects. These mats serve as sources for transmission by beetles to healthy trees.

The tree tries to fight off the fungal infection by plugging its vascular system to stop the fungus from spreading, and it literally kills itself. Treatment is also difficult because a healthy vascular system is necessary to transport systemic fungicides throughout a tree. Oak Wilt has to be caught early to be treatable.

Infected trees should be removed promptly. Wood can be used for firewood, but only if it’s done properly. It must be debarked, or covered and sealed during the warmer months. Diseased trees with bark can serve as a source of further infection for neighboring trees.

The main period of infection is in the spring, when new vessel wood is being formed. Symptoms in red oak occur as early as May, so as warmer weather arrives, keep an eye on your oak, and if you have any questions, make sure to get help. An ounce of prevention might be worth a few hundred board feet of cure.

John Palmer is an ISA Certified Arborist and a Mayoral Appointee to Lakewood’s Tree Task Force.