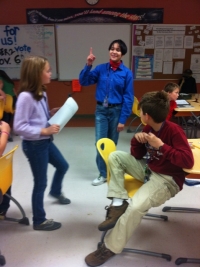 Obama and her advisors field policy questions from the voters.
View Image Gallery

Did you ever vote in a presidential election when you were in 6th grade? Well, we did just that in Mr.Spooner’s 6th grade class at Harding Middle school. I’m Sofi Dunay, I was randomly chosen as a Republican and I’m Abby Allio, I was a Democrat, and we got to take part in the election simulation. Our class participated in an election simulation. The simulation was a process including learning about real world issues, learning to run a campaign, being an educated voter, and participating in society.

To start off the campaigns, our roles were somewhat randomly chosen because we put in what we wanted our roles to be and Mr. Spooner randomly chose our roles according to who wanted to be what, though he chose our parties without any input from us. The roles we could choose included: candidate, campaign manager, speech writer, policy analysts, finance manager, and P.A.C. member-sponsor/mudslinger. Each student had an important part in making the election simulation work. Not only did everyone have to perform their roles in the campaign, but we each had to be an undecided voter. The Democrats had a question and answer session, explaining their views on the solutions for real-life issues. The Republicans had a rally, trying to get people excited about voting for Mitt Romney. So, now that you know what the Election Simulation is, let’s tell you about our experiences.

I’m Sofi. As a Republican P.A.C. member, mudslinger, and undecided voter I got a lot out of the Election Simulation. It was a great chance to learn how to work better in a group. It was great to learn about real world politics while having fun in the classroom too. It was cool to compare the real-world candidates/parties’ views to the opinions inside of the classroom. We also learned to be fantastic problem solvers when Hurricane Sandy took our time away. We still had to have some kind of debate and voting before the real results came out. We decided to take a couple class periods to further research the platforms. Then, we individually, made a pro and con list for each candidate. We were told to vote for the candidate with the most pros.

The next issue that came up was that my classmates and I were confused on what we were to vote on; the real world issues and the candidate’s solutions for them, or the campaigning in the classroom? We ended up voting for both! I thought it was the perfect solution because it helped clear up the confusion and eliminate the possible mistakes. Our results ended up reflecting the results in real-life. Almost all of the ballots that Mr.Spooner read said for campaigning in the classroom: Mitt Romney, for real-world issues: Barack Obama. The Election Simulation was a big opportunity to grow as a student and I liked it!

I’m Abby. Being in the election simulation was really fun and at the same time, taught me many things on what an election is really about. As a speechwriter for the Democratic party, I learned how to work inside a group or party and how to do my part in the campaign to make it successful. I also played the part of being an undecided voter where I gathered information to help me make a decision on electing a president. I needed to use the thought process in it so my decision could be the right and successful one. Although those roles are very important, as a 6th grader I must say that when it comes down to it all, being a student is the most important role in this simulation because I’m learning about the components of an election and learning how to be successful in it. Now, what I thought of actually participating in the simulation was that it was fun and it really taught us about elections because we were experiencing one not only in the classroom, but in real life. I would have to say that I personally really had fun, as a student, speechwriter, and voter. To all you teachers or people who want to be teachers out there, this was a great learning experience, and you should try it because I think your students will love it.

Coming from two students from different perspectives in the simulation, we both think that this was an awesome learning opportunity. We grew in so many ways, learned a lot, and had fun at the same time!