Our Century City...Lakewood's Antiques... Sucking It All Up! A 1912 Era Hand-Pump Vacuum Cleaner 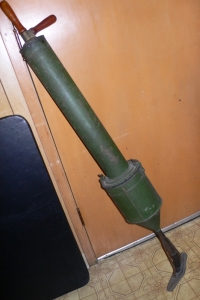 When the final history of this world is written, the period from 1865 to 1914 will arguably be one of the greatest times of invention and discovery for the human race. True, life is a continuum, and many of the inventions that first saw the light of day during that time period had roots even earlier. Still, just think about it ....Beginning perhaps with the first practical applications of electricity, that era also saw the rise of the telephone, electric lighting, cameras, bicycles, automobiles, sewing machines, dictation machines, and recording devices. And of course with advances in communication came advances in the arts and sciences, medicine, and also, unfortunately, weaponry. For the purpose of this column, we note that this era also marked the dawn of the home vacuum cleaner.

Indeed there were so many inventions back then that by the end of the nineteenth century, there was a feeling that "everything that can be invented has been invented." Although an American Commissioner of Patents was credited for the quote, research seems to indicate that it may not have been said by him at all. Nonetheless, that expression appears to have been a popular sentiment at the time, and even reportedly appeared in the Punch/London Charivari periodical in 1899, expressed as a joke.

Inventions often have quite a bit of lag time between their public debut and public acceptance. Sometimes that is due to the need for other technologies to catch up. Electric vacuum cleaners, for example, only worked where there was electricity, and electricity was long in coming to many parts of our country, even into the 1920s and 1930s. Most of the housework was done manually back then, with carpets needing to be taken outside and beaten in order to remove the dust and pet dandruff that accumulated on those new fancy factory-made loom rugs that the modern 1890s American housewife was so fond of. Before long, both manual and electric vacuum cleaners were in the mail-order catalogs and being shipped out to homes across America.

In 1909, the Sears catalog advertised its "Quick and Easy" vacuum cleaner model for $4.35. That was one of the earliest hand-held, non-electric, mass-produced vacuum cleaners that could be operated by one person. Many manual vacuums at that time actually required having a second person around in order to operate a complex bellows system. The vacuum cleaner illustrated here appears to be a National vacuum cleaner made with a 1907 patent design. This type of one-person machine worked by holding the right hand on the horizontal handle while using the left hand to grab the vertical handle and pull the interior bellows up and down and up and down and up and down while somehow maneuvering the device over one's carpet or floor.

Whether this repetitive motion was in fact easier than moving the furniture, rolling up the carpet, and taking it outside to beat the stuffing out of it, I will leave to your imagination dear reader. But at least it was compact, lightweight, portable, and reliable. In using this device myself, I found the best way to work the machine was to drag it backwards at about five inches per pump. At that rate, I would probably finish the downstairs carpet in about a month's time, but I COULD probably defeat anyone in Lakewood at arm-wrestling with my left arm! Of course, when electricity came along, those electric cleaners with motors did the job a lot quicker, although they were much louder.

Come to think of it, we've probably gone through a half dozen electric vacuum cleaners around our home in the past 50 years or so, but this old manual one still sucks up the dirt on command after a century of service-- understandably needing only a new rubber hose at the present time.

Please do not ask me about my arm-wrestling prowess, however. Those days may be gone, but I am indeed at least aware of a Lakewood century sweeper that can still sweep on, even when the electricity is out! It's a truly "green" sweeper that way too, right down to its awesome green paint job!