Girls On The Run Program Hits Its Stride In District 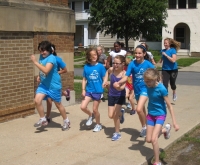 Lincoln Elementary's Girls on the Run members warm up for their weekly run.
View Image Gallery

A program called Girls on the Run is helping girls around the district learn to build strong and healthy lives physically, socially and emotionally. The Girls on the Run program, which has been around for 15 years, made its debut in the District last school year at Emerson Elementary School and Harding Middle School (where it is called Girls on Track) and this year has expanded to Garfield Middle School (in the fall) and Grant and Lincoln elementaries.

The program’s mission is to educate and prepare girls for a lifetime of self-respect and healthy living. Twice a week for 10 weeks, the girls get together for an hour and spend the first half hour talking about issues that affect young and adolescent girls such as bullying, peer pressure, body images and the media, etc. The advisers then extend the lesson through a half-hour of running, designed to build confidence in the young girls as they get stronger each week.

The program culminates with a celebratory 5K (3.1 miles) race that brings Girls on the Run clubs from all over Northeast Ohio together. This year, that race will be held on May 20 in Akron.

“Our girls have really embraced the Girls on the Run philosophy of Moving Forward, not just physically but emotionally,” said Grant coach Leslie Krogman. “They are conscious about their behaviors and attitudes and how it can affect those around them. We have worked hard and improved self-image, attitude and positive self-talk."

At Harding, coach Emily Adkins can be more pleased with how the program is working for the 14 girls participating at Harding.

“Girls on Track is such a beneficial program to the …  girls. It amazes me how much support we get from our staff, parents and previous Girls on Track participants. Now that we are nearing the end of the season, I love seeing all the friendships that have formed and the smiles on the girls’ faces in the hallways.”

The girls are noticing the difference, too.

“Girls on Track … has helped me change my attitude so that I am nicer to other people.  It has also helped me make friends and feel a part of a special group,”  said sixth-grader Alexes Foster.