We Know You Didnt Mean To Kill Our Cat! 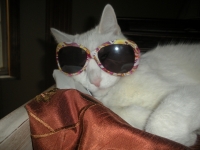 It was an accident. You were driving down Lake Avenue on Thursday evening, January 12th, at about 6:30 or 7:00 p.m. That’s when Snowball ran out into the street and was struck by your car. Needless to say, he is dead. We know you didn’t mean to hit him. It was probably unavoidable. It just happened.

But what you did next was avoidable. In those few split seconds after your car hit him, you realized what had just happened. And that’s when you made a choice. Instead of stopping to check on the cat or taking just a few minutes to find out where he lived, you chose to just keep going. Perhaps you were in a hurry to get home. Maybe you had somewhere to be. Or perhaps you just didn’t care. After all….it was just a cat, right?

Except it wasn’t just a cat. Snowball was our cat. He belonged to our whole family. He was part of our family.  He was the love of our 9-year-old daughter’s life.

Had you stopped, you would have seen that he was wearing a collar that had his name, his address and his telephone number. In fact, you hit him right in front of our house. Had you stopped, you would have learned that Snowball was a special cat. We know that all pet owners think that their pet is special, but Snowball really was. We always said that he was more like a dog than a cat. If you had stopped, we would have told you that all or our friends and neighbors loved Snowball. You would have learned that my daughter named him Snowball because he was all white.

You see, we do not blame you for hitting Snowball that day. We knew and accepted the risks of having an indoor and outdoor cat. When we moved onto this street just a year ago, we knew that his life would probably be cut short by a car on busy Lake Avenue. But we continued to let him go out because Snowball loved going out to play and visit our neighbors. Snowball was only 4 years old when he died, but he lived those four years to the fullest. Whether it was climbing the tree in the front yard so that he could get on the garage roof and peek into our bedroom window, helping us rake leaves by jumping into the pile, playing hide and seek by hiding under the tarp, or lying down on his back to get his belly tickled when he heard our car pull into the driveway, Snowball loved life.

Had you stopped, we would have not only shared with you these stories about why we loved Snowball so much, but we would have thanked you for doing the right thing and letting us know that Snowball was hit and laying in the middle of Lake Avenue. It was after all, just an accident!

But you didn’t. You drove on leaving him lying in the middle of the road. So, someone else did for you what you should have done. You see since it was a Thursday night, it was the night that our neighborhood puts its trash out for pick-up the next morning. Luckily, we have wonderful neighbors, one of whom noticed Snowball lying in the road and went to investigate. When they saw it was in fact Snowball, they came and knocked on our door. It was cold and it was raining that night. It would have been far easier for them to ignore him. But, instead they took the time to let us know what happened. They spared us and especially our daughter from the agony of either not knowing what happened to him or of finding him in far worse condition after lying in the road where he would have been susceptible to other cars.

In case you were wondering (which I doubt you are), we are going to have a small ceremony for Snowball today and bury him under the tree that he loved to climb. We are very grateful to our kind neighbors who by doing the right thing (which you should have done), allowed us the opportunity to make that happen.

By the way, we also are using this unfortunate incident as a teaching moment. Even though we know that your hitting Snowball was an accident, we nonetheless are teaching our daughter that even though accidents do happen, it’s how you handle yourself and what you do after an accident that matters. In a world where we tend to think of ourselves first and others second, there is still room to “do the right thing.”

We love you Snowball and will miss you very much!

Read More on Slife of Life